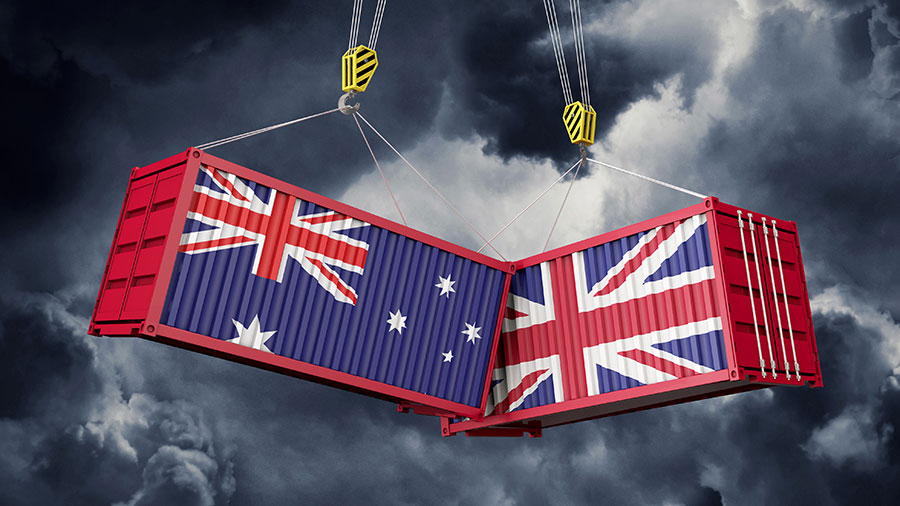 The real impact of a free-trade deal with Australia will be felt by British farmers in around 10 years’ time after the removal of direct support payments, say industry leaders.

Prime minister Boris Johnson announced last month that the UK had signed a free-trade agreement (FTA) in principle between the UK and Australia.

The government says tariffs and quotas on Australian agri-food goods will be phased out over the next 15 years “to allow farmers to adjust to the new trading environment”.

Farm leaders and economists were asked what this deal will likely mean for the agriculture sector, its high standards and on future trade during a cross-party UK Trade and Business Commission session on Thursday (1 July).

Former NFU chief economist Sean Rickard predicted that not much would change in the next two years, but significant change would be felt in 10-15 years’ time.

“We know there are always winners and losers when it comes to trade negotiations,” he said.

“It just seems that agriculture is going to bear a disproportionate cost of this deal, and what worries me is that it’s the templates for deals that will be done with others.”

He added: “In the next year or two, we won’t see much difference… 15 years out, you have potentially an enormous impact on an agricultural industry.

“I think the government are aware of that. When you look at the Agriculture Act, it is not about producing food now. It is about encouraging farmers to do something other than produce food.

“They are preparing to slim down the agricultural industry. I think that is such a waste of enormous potential and opportunities.”

Bigger volumes of Australian sheepmeat imports in about 10 years’ time would depress prices, he suggested.

“This is really concerning because it is likely to happen at a time when the Basic Payment is being taken away from farmers.”

Much of the evidence we heard today pointed to the obvious benefits of the UK-Australia trade deal for the Australian market, with few details yet on what the UK will gain.

Jilly Greed, a Devon beef farmer and co-founder of Ladies in Beef, described the FTA as an “absolute betrayal” by government of UK agriculture’s high animal welfare and environmental standards.

“This is like Christmas all over for Australia and then stacking up behind are the other big exporters – New Zealand, Brazil and the US,” she said.

“Currently, there is about 3,700t of Australian product coming into this country. This will increase to 45 times that amount to 170,000t in 15 years’ time.

“The current amount of total imported product is about 240,000t. We are only about 65% self-sufficient. It will have an impact without doubt.”

First, Australia could significantly increase its red meat exports to the UK, which would depress prices and mean “Jilly [Greed] and her colleagues are going to be hurt”.

Second, Australia could continue to target its exports at its most lucrative markets in Asia, North America and the Middle East. Under this scenario, “things stay roughly as they are, which mean the consumer benefits are next to zero”.

The most likely outcome was “somewhere in the middle”, said Mr Grozoubinski, where Australian beef and lamb imports increase, offering more options for restaurateurs and packaged foods.

“The impact on farmers will really depend on how much take-up there is from Australia,” he added.

The government’s own estimates suggest that the UK-Australia deal will increase GDP by only 0.02%, but Australia is expected to enjoy an export boost six times that of Britain from the arrangement.

Farm leaders say they are concerned the government had not carried out an impact assessment on the effect of an Australia FTA on the UK agricultural industry.

Caroline Lucas, the Green Party MP for Brighton Pavilion, who chaired the session, said: “In their haste to make headlines, the government compromised on our standards, our climate commitments and even the livelihoods of our farmers.

“We will use today’s evidence to make constructive recommendations on how this can be improved, but we urge the government to show some backbone and stand up for Britain in future talks rather than rolling over to make a quick deal.”

A spokesman for the Department for International Trade said: “Any deal we sign will include protections for the agriculture industry and will not undercut UK farmers or compromise our high standards.”

Government has questions to answer on standards row

The government committed to protect UK farming standards in any post-Brexit trade deal – and it is adamant this remains the case.

However, farm leaders question how this will be possible if the UK agrees a FTA with Australia, where farming standards are lower than in the UK.

During the session, Jilly Greed said Australia has 40% production in hormone beef, a method which is banned in the EU. “They insert a pellet under the ear of the animal and that accelerates growth by anything up to 30%.”

On livestock transport, cattle in Australia can travel up to 24 hours without food or water. But in the UK, the government is planning to ban live exports and reduce livestock journey times to a maximum of eight hours.

On farm, Mr Stocker said Australian sheep farmers use “mulesing” on about 60% of sheep.

This controversial method involves removing strips of skin off the hind quarters of sheep without the use of anaesthetic to avoid flystrike and maggots.

“Our consumers here would be absolutely horrified if they knew we were buying products from lambs that had been mulesed,” he added.

David Bowles, head of public affairs at the RSPCA, said the charity has designated six animal welfare differences between the UK and Australia in the beef sector and a couple in the sheep sector.

A free trade deal is being signed with Australia which could allow lower welfare imports 🇦🇺🐑👩‍🌾 This would be a big mistake; animals, the public, and farmers deserve better. We'll now push for protection of our standards within the deal https://t.co/9hwotAAOmv #ActNowForAnimals pic.twitter.com/uJvdEPU9gq

"Yesterday the EU Commission said they were going to get rid of cages [in farming], but more importantly said in any future FTAs they'd require equivalence on animal welfare. The UK hasn't done that" @DavidBowles21 of @RSPCA_official on animal welfare standards in today's session pic.twitter.com/KyeBJLoBqv

Mr Bowles said: “The government said in its manifesto it will not compromise on animal welfare standards in any free trade agreement. What does that mean?

“Does that mean we won’t lower them? Well, that’s fine, but if you don’t have equivalence or conditionality in your FTA, it means you export your welfare standards.”

“I think the government is being coy, but a more reasonable way of saying it is disingenuous as to what it has done.”