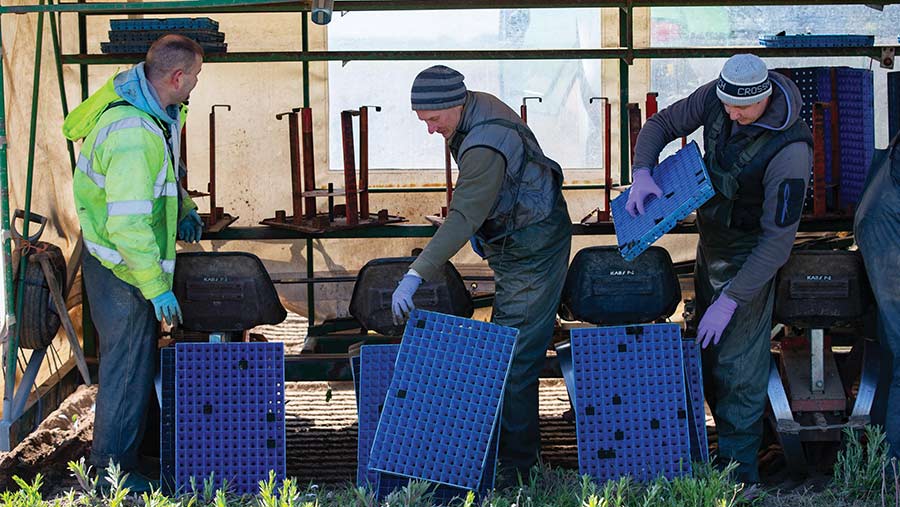 Farmers employing staff or casual workers will have to demonstrate they are abiding by modern slavery rules under plans for the Red Tractor assurance scheme.

Proposals due to be revealed next month will see the Red Tractor scheme extended to cover additional employee welfare and environmental standards – with an increasing focus on best practice in the workplace.

Labour exploitation and modern-day slavery are major problems in agriculture.

Up to 13,000 people are exploited annually in UK food and farming, according to the Gangmasters and Labour Abuse Authority.

The Modern Slavery Act requires companies with a turnover of more than £36m to produce an annual statement setting out the steps taken to ensure there is no slavery or human trafficking in their business and supply chains.

Although most UK farms are below the £36m threshold, Red Tractor chief executive Jim Moseley said bigger food processors and retailers were increasingly looking to ensure their suppliers – including farmers – are acting responsibly.

“Inevitably, at some point those demands are going to come down even to the smallest farms,” Mr Moseley told Farmers Weekly.

“Red Tractor certification could demonstrate that growers and livestock producers were complying with the law.

“If we don’t, then it would be our concern that some of those larger global companies will actually come with their requirements and approaches to agriculture, which will not be bespoke – and they might be very heavy and difficult to to complete.”

Revised Red Tractor standards will also highlight the importance of health and safety.

Agriculture is one of the most dangerous UK sectors, with a workplace fatality rate some 18 times higher than the all-industry average.

Worker welfare standards are already in place for the fresh produce sector.

Farming employs 1% of the UK workforce but accounts for one in five workplace fatalities.

He added: “The whole industry has got to address this issue.”

Earlier this month, the Human Trafficking Foundation warned that agriculture was among the sectors likely to see an increase in modern slavery unless the government took swift action to “plug glaring gaps” in Britain’s border control system post-Brexit.

Sara Thornton, the UK’s Independent Anti-Slavery Commissioner, said: “Considerable changes to the rules on EU migrants working in the UK are not widely understood and there is a real risk of labour abuse and exploitation.”

Standards under review include:

Environmental protection
Standards are likely to be extended to reflect changes in farming rules for water, and to demonstrate that agriculture is taking its responsibilities seriously.

Bull calf euthanasia
The routine culling of newborn dairy bull calves – already banned by some dairy processors – is expected to be phased out by the end of 2021.

Worker welfare
Employee standards governing health and safety in place for the fresh produce sector are likely to be extended to cover other sectors.