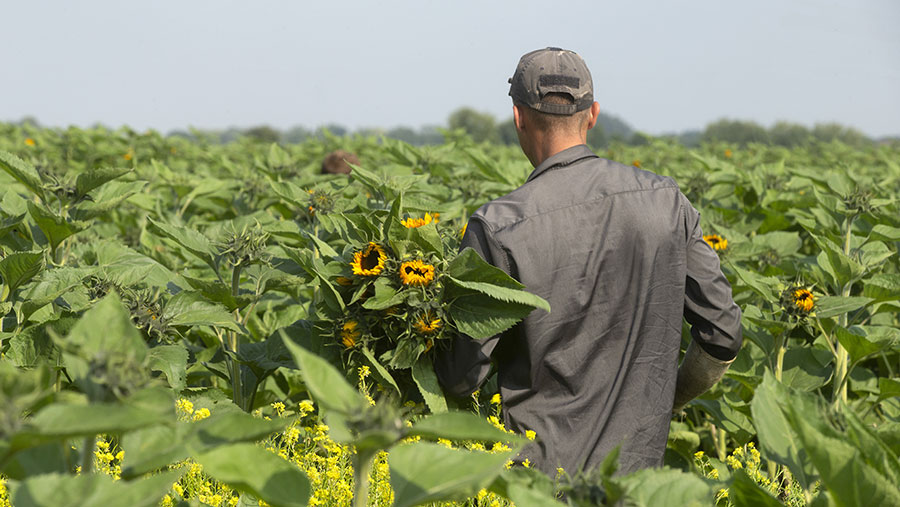 Defra secretary George Eustice has delivered an update on the government’s seasonal farm labour scheme, while admitting the war in Ukraine has hampered efforts to recruit temporary workers to UK farms.

Speaking at the Royal Highland Show, Mr Eustice said current intelligence suggests some 28,000 temporary farmworkers have been given seasonal worker visas to come to the UK this summer to pick and pack fruit and vegetable crops.

The government has announced a further 10,000 visas for farmworkers will be made available this year, including 2,000 poultry workers, to tackle labour shortages across food production.

Mr Eustice said: “Last year, about 70% of the staff coming in under this visa scheme were Ukrainians. This year, very few Ukrainians have come, for obvious reasons.

“They have stayed at home, in some cases to fight, and therefore the operators of the scheme have had to go to a much larger, much more diverse range of countries to get people in.

“And that physical recruitment of those sorts of numbers from multiple countries has proved a bit harder.”

Scottish secretary Alister Jack said farm labour shortages were a serious problem, not just in the UK, but also in Europe and across the world.

He also defended the government’s decision to increase the minimum hourly wage for seasonal farmworkers to £10.10. “They have more costs in getting here and accommodation costs on top, so we felt the extra 60p/hour was a fair balance for them.”

Before Brexit, under the now defunct Seasonal Agricultural Workers’ Scheme, about 60,000-70,000 seasonal/casual farmworkers, mainly sourced from Bulgaria and Romania, would travel to the UK to work on farms

The NFU has repeatedly criticised the government for not doing enough since Brexit to ensure similar numbers of temporary staff are recruited to farms. Last year, about 25,000 of the maximum 30,000 farm seasonal worker visas on offer were taken up.

Mr Eustice said the government would do an assessment later this year about the seasonal worker numbers for 2023. “If it needs to be higher, we will set it at a higher level,” he stressed.

A cross-party group of MPs has accused the government of “failing to understand” the labour needs of the food and farming sector.

The Environment Food and Rural Affairs (Efra) Committee made several recommendations to government to tackle labour shortages in the food sector.

But MPs said the government had rejected its recommendations, including lowering the English language requirements for some skilled worker visa applicants, such as butchers, and carrying out a “lessons learned” exercise on the temporary short-term visa schemes established last autumn.

The government had also turned down the committee’s recommendation to make the Seasonal Workers Pilot a permanent scheme.

“The government really must listen to the experts – our farmers and our food producers,” he added.

“We need a more robust immigration regime that allows the farming and food sector to plan ahead with certainty and grow their businesses. Otherwise, we are placing in danger the very future of the sector.”