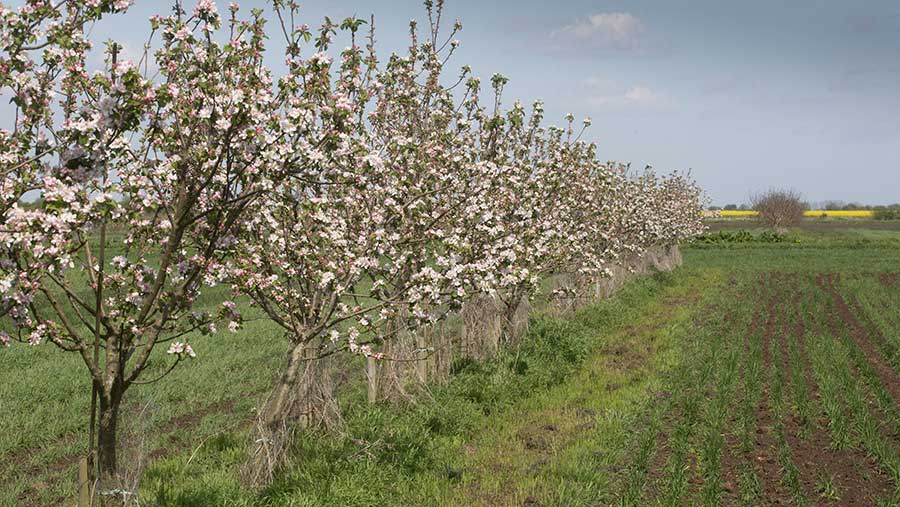 The pressure for action to prevent a global climate crisis is building, and UK farmers have an important role to play, but tenants risk getting left behind through no fault of their own.

Although there is no doubt that Covid-19 will dominate the history books about 2020, the year was also exceptional for being the hottest on record, explains Savills director of farms and estates Richard Binning.

Many countries around the globe faced extreme weather events, from the Australian bushfires to flooding in China and heatwaves in Europe.

“There is heightened interest in the contribution land can make to tackle the issues climate change is presenting, not least the ability for soil to sequester carbon from the atmosphere,” says Mr Binning.

According to the most recent Defra data, the total area of land under tenancies in England is 6.33m acres, meaning tenant farmers have a significant role to play in any environmental strategy, but current plans and incentives strongly favour landowners.

What farmers can do

Soil carbon sequestration is seen as having a key role in reducing atmospheric carbon and could also provide a financial bonus for farmers.

Around the world, land managers have the opportunity to store carbon in the soil through regenerative agricultural practices and then sell that captured carbon in the market for offsets.

Restoring soil carbon has co-benefits for farmers, including increased productivity and environmental resilience, according to Savills.

Farm-level payments for carbon farming can be action-based, result-based, or a hybrid of the two.

In result-based schemes, the payment to land managers is directly linked to measurable indicators of the climate benefits they provide.

However, the main factor the schemes all have in common is that they require long-term management and commitment, both to succeed environmentally and for the farmer to receive payment – a luxury that most tenants don’t have.

Ways of storing carbon in soil

It is in a landowner’s interest to incentivise improvements in soil organic matter, says Andrew Teanby, associate director of rural research at Savills.

If a tenant adopts regenerative agricultural practices, tenancy law does not necessarily allow them to be rewarded for doing so, he says.

Agricultural Holdings Act (AHA) 1986 and farm business tenancy tenants can claim compensation for improvements from their landlords at the end of their agreement.

This was widened in 2015 to incentivise tenants to farm sustainably, allowing claims for improvements from the use of digestate and compost.

However, other benefits such as from cover and catch crops still fall outside the compensation provisions.

New tenancies created under the 1995 Agricultural Tenancies Act offer more flexibility for certain objectives and management regimes to be built into an agreement, on negotiation between landlord and tenant.

This could include soil quality tests taken at tenancy commencement, a monitoring regime, and a final assessment at the end of the term, with the tenant entitled to an agreed compensation level upon any improvement, says Mr Teanby.

“Logically, improving soil quality should also increase the land’s value,” he says. “However, the farmland market does not currently exhibit meaningful price differentiation in this way, with scarcity being the major driver of values.

“Due to agricultural subsidy reform, we forecast that more farmland will be marketed for sale. If supply exceeds demand, this could lead to a differentiation in value based on other factors such as soil organic matter levels.

“Taking a long-term view, it is therefore in a landowner’s interest to encourage the regeneration of the land they own.”

For some landowners, their inability to influence tenants’ behaviour is frustrating, says Mr Teanby; for tenants, any desire to improve the holding through environmental management is limited by their agreement terms.

A Savills survey reports that 86% of the agent’s professionals believe landlords are seeking more influence over tenants’ environmental management within new lettings.

About 60% said that private landowners’ environmental concerns were influencing their rural asset management, with the core challenge being how to balance these with financial performance.

Careful thought needs to be given to carbon, including ownership, how it can be generated, what guarantees the market requires and how these can be met within the context of a tenancy, says Mr Teanby.

“High quality carbon offsets require sequestration to be permanent and tenants are often unable to guarantee this,” he says.

“If the tenancy agreement allows the tenant to sell credits then this income stream could be partially rentalised, and where the landlord requires credits a right of pre-emption may be an option.”

Looking at the ability of tenants to capitalise on new income streams for carbon markets, it is fair to say that both tenancy agreements and the legislation that underpins them are far from fit for purpose, says Tenant Farmers Association chief executive George Dunn.

Some landlords have attempted to use agreement clauses designed to reserve mineral rights to cover carbon storage and sequestration, wresting the benefits away from tenants.

However, this is unsupportable, says Mr Dunn, as Section 336 (1) of the Town and Country Planning Act 1990 defines minerals as substances worked for removal, meaning carbon does not fall within the same legal bracket.

“Some landlords are trying to add clauses to new farm business tenancies that provide only them with the opportunity to use the holding for carbon storage and sequestration,” he says.

“All tenants should take advice first to ensure they are not shutting the door on being able to take advantage of certain environmental schemes.”

Tenants already have a lot to offer in terms of carbon management – such as with grassland, cover crops, peat, hedgerows, trees and soils – but the current legislative provisions on compensations are not conducive to incentivising tenants to invest in providing these benefits.

Farm business tenancies are also often far too short to allow tenants to even contemplate providing the long-term benefits that many in carbon and biodiversity markets are seeking, says Mr Dunn.

“Clauses that require tenants to use their holdings for ‘agricultural purposes only’ will also cause problems, as this would preclude the use of land for carbon purposes,” he says.

“However, ancillary uses would be permitted, such as management of grassland to store more carbon, hedgerow trees and shelter belts, and the incorporation of organic manures.”

The NFU has committed to making UK agriculture carbon neutral by 2040 and has identified three pillars of activity to achieve this, including farmland carbon storage.

Tenants’ forum chair Chris Cardell says: “A tenant is the person best placed to deliver improved soil health as they usually have the necessary resources to do this.

“Improved soil health is a benefit to the tenant through the agreement and to the landlord at the end of it, as well as to the next incoming tenant. The best results are achieved when landlords and tenants work together with clear long-term objectives.”

Any tenants wishing to claim compensation or enter an environmental scheme should take stock of soil quality at the beginning of the agreement or prior to joining a scheme, and ensure it is properly recorded, Mr Cardell advises.

Ideally, for current and new tenancies, advance consultation with a landlord should take place as to how improvements should be treated and managed.

“Going forward, carbon values need to be more seriously considered,” he says. “Currently it is unclear how values should be treated and split between a landlord and tenant and who ultimately owns them.”