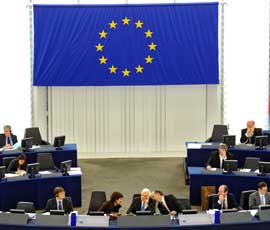 The value of direct payments to Welsh farmers would be almost halved if CAP reform proposals to introduce a flat-rate entitlement system go ahead.

Under the proposals announced on 11 October there would be a 40% shift away from the current value of Welsh payments per hectare which are calculated using the historical payments system.

According to Farmers’ Union of Wales dairy committee chairman, Eifion Huws, this move would have a catastrophic impact on Welsh dairy farming.

“This would mean a huge fall in income for many dairy farmers in 2014 so there is a real need to change this as well as other measures in the proposals,” said Mr Huws.

“Only a few years ago the EC were talking about measures to ensure a ‘soft landing’ for the dairy industry in the run up to the abolition of milk quotas. Yet these latest proposals would wash away any effect the quota regime soft-landing provisions provide for dairy farms.’’

Mr Huws insisted that any transition away from the historic entitlement value to a flat-rate payment must be gradual and over a lengthy period.

His concern is shared by FUW president, Emyr Jones, who suggests that Wales’ farming communities would be undermined by the latest CAP reform proposals. He said they would both destabilise Wales’ rural communities and devastate European food security.

“Last year the European Commission acknowledged the dangers Europe faces over the coming years due to food shortages and identified this as the number one priority,’’ he said. “But the latest proposals would take land out of agriculture and reduce food production across the EU while undermining farming communities across Wales.”

Mr Jones said the union would work hard to get changes implemented to protect rural Wales and Welsh food production.

NFU Cymru President, Ed Bailey, who was in Brussels for the announcement, maintained that the reforms failed to deliver a common, market focused policy that supports the production of quality food.

He said they would hinder Welsh farmers’ ability to sustainably produce food.

“Whilst initial analysis completed by the European Commission suggests Wales may be one of the countries least impacted by ‘greening’ of the Pillar 1, this completely masks the disruption it could cause to some of our most productive dairy and arable farms,’’ said Mr Bailey.

“Prescriptive rules on grassland, cropping and the re-introduction of set aside, in all but name, will serve to hinder our competitiveness, reduce our ability to change and adapt to new markets and climatic conditions.’’

For full coverage on CAP reform announcements to to our dedicated page.

You can add your view and read what people are saying on our forum.