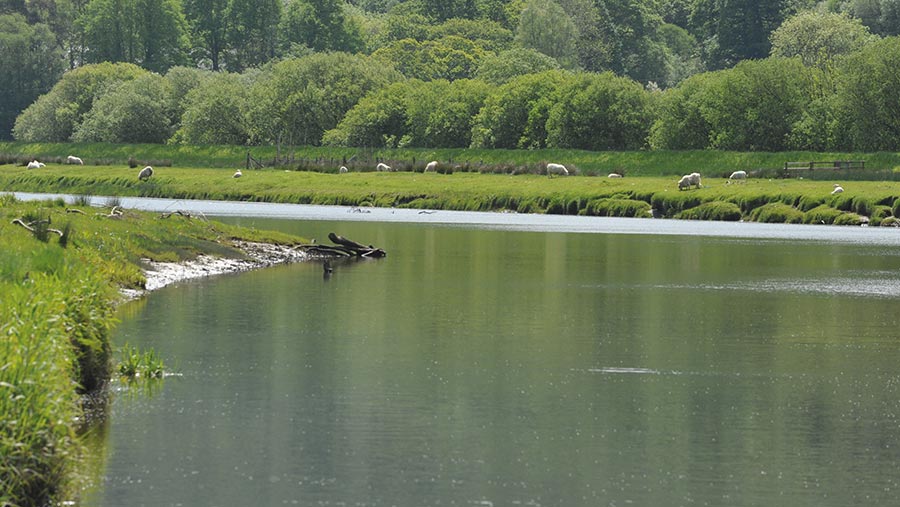 The clash between farmers and the Welsh government over the new all-Wales nitrate vulnerable zone (NVZ) is intensifying into one of the most bitter disputes ever waged in the Welsh countryside between the devolved administration and the industry.

When the government announced its intention to place every farm in Wales in an NVZ, it maybe hadn’t considered the scale of opposition that decision would elicit.

The Water Resources (Control of Agricultural Pollution) (Wales) Regulations 2021 were swiftly brought in – they were announced by Welsh farming minister Lesley Griffiths on 27 January 2021 and the transition to the new system started on 1 April.

It has provoked fury in all sectors of agriculture and culminated in NFU Cymru launching a legal challenge last month.

The union reckons that the Welsh government acted unlawfully by failing to take into account all relevant information when it undertook a regulatory impact assessment before the new legislation was introduced.

It is also challenging the government’s failure to include in the regulations a grassland derogation to allow farmers with at least 80% grassland in NVZs to have a nitrogen loading limit of 250kg/ha instead of 170kg/ha.

This was available under the previous regulations for those in NVZs in Wales.

“We are now waiting to hear whether the court will give us permission to proceed with this case, and therefore we are not able to comment further at this time,” said the union’s president, John Davies.

As the pre-election “purdah” period started on 22 March, ahead of the Welsh government election on 6 May, there has been no comment forthcoming on this from the Senedd either.

When it introduced the regulations, it said they were necessary because farmers were polluting rivers at a rate of three incidents a week.

But while individual farms are guilty of pollution, the industry said it was unfair that farming as a whole is being legislated against while other sectors are guilty of persistent pollution.

Last month, it emerged that, in 2020, raw sewage was discharged into Welsh rivers more than 100,000 times from 2,000 water treatment works and sewer overflows across the Dŵr Cymru Welsh Water network.

In response to that revelation, farmers say it is an injustice to demonise Welsh farming with whole region NVZ legislation while not controlling other sources of pollution.

A Pembrokeshire dairy farm will have to reduce its milking herd by up to 60 cows or find an additional 73ha of land to farm if the Welsh government sticks to its decision to not include a grassland derogation option within the all-Wales NVZ.

The Lewis family milk 350 Holstein Friesians, with an annual milk yield a cow of 10,300 litres, producing 4,910 litres of that from forage. 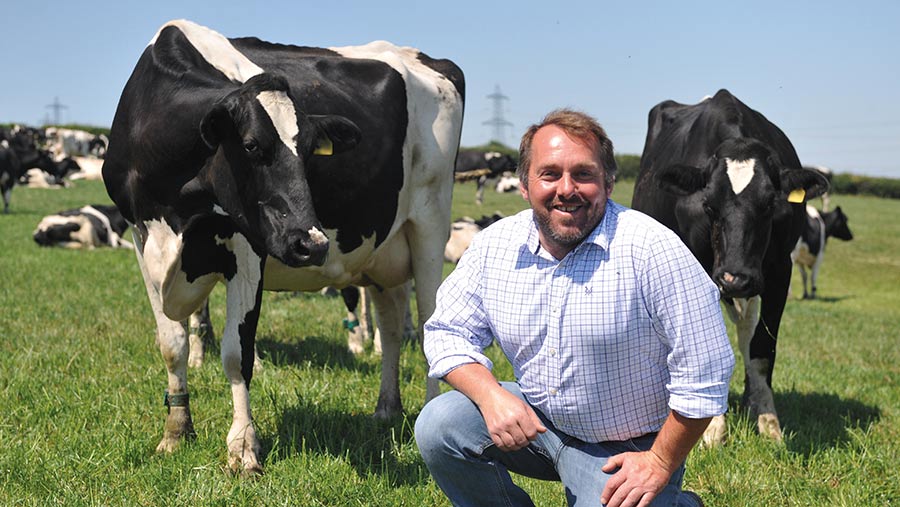 In 2018, they spent hundreds of thousands of pounds installing a 40-point rotary parlour and associated infrastructure to support herd expansion at Poyerston Farm, near Pembroke.

But, to comply with the new NVZ directive of limiting applications of nitrogen from livestock manure to 170kg/ha, they will have to destock or increase their land area, according to Roger Lewis, who farms with his parents, Philip and Sheila.

“We will have to lose 50-60 cows and 30 from each of the youngstock age groups,” he calculated.

“We are not an intensive system – if we were we wouldn’t be able to grow 80 acres of crops, which includes 50 acres of combinable crops.”

“We have driven efficiency within the business over the years, driven by AHDB and everyone else, and we are now faced with taking a backward step,” said Mr Lewis.

“To have to get another 180 acres to match the requirement of our stock numbers is crazy, and where will we get that land when everyone else is in the same position?”

He believes that the decision to exclude a grassland derogation will hinder 80-90% of dairy herds in Wales.

The new dairy infrastructure includes a 1.5m gallon slurry store, which gives him sufficient storage for the five-month requirement.

But for others, the cost of storage, the practicalities of getting upgrades completed before the deadline and securing planning permission for new infrastructure, could be insurmountable, he said.

A large-scale arable grower, who has achieved one of the lowest carbon footprints of comparable businesses by using digestate to supply 70% of his nitrogen requirements, says adjusting his fertiliser policy to comply with NVZ requirements will increase this by 322t of carbon dioxide equivalent (CO2e).

Richard Anthony farms 1,214ha of crops and runs an 800-ewe sheep flock with his wife, Lyn, at Tythegston Farm, near Bridgend.

They are contracted to take digestate from a Severn Trent AD plant based on the edge of their farm and this makes up about 70% of their annual fertiliser usage.

“As an organisation, we are focused on our carbon footprint and have undergone the laborious exercise of carbon calculating,” said Mr Anthony.

“The results are staggering, leaving us with a carbon footprint of minus 19,000t of CO2e.”

Digestate falls under the limit of 170kg of total N/ha of high readily available nitrogen.

“We have calculated, to maintain production and stay within the rule, we will have to top up our digestate applications with 79.1kg N/ha in the form of artificial nitrogen,” Mr Anthony explained.

“This will not only come at significant cost financially, but also to the environment, and will increase the farm’s carbon footprint by 322t of CO2e and, over time, damaging our soil biology and decreasing soil organic matter – two of our biggest drivers for carbon sequestration.

“Is this the right path we should be taking?”

Mr Anthony has now written to politicians at the Senedd urging them to rethink the NVZ policy.

Under the legislation, the farm would have to comply with a closed period for organic fertiliser from 1 August – one of its driest months – when run-off risk is minimal and when crops are still growing and need nitrogen, until the end of December.

January, said Mr Anthony, is one of the farm’s wettest months, when run-off is highly likely.

“Surely these dates need to be adjusted to suit the weather and the growing crop season in Wales?” he questioned.

“We believe our system of spreading to crop needs is more of a sustainable option.

“We currently only spread under the recommendation of a Facts-qualified adviser, where crop deficiency or need is seen through leaf and soil analysis.”

Even small-scale businesses would be forced to invest tens of thousands of pounds in infrastructure to meet the Welsh government’s NVZ demands.

Richard Walker and Rachel Edwards produce beef from 35 suckler cows, but calculate that installing a new slurry store and covering yards would set them back £50,000. 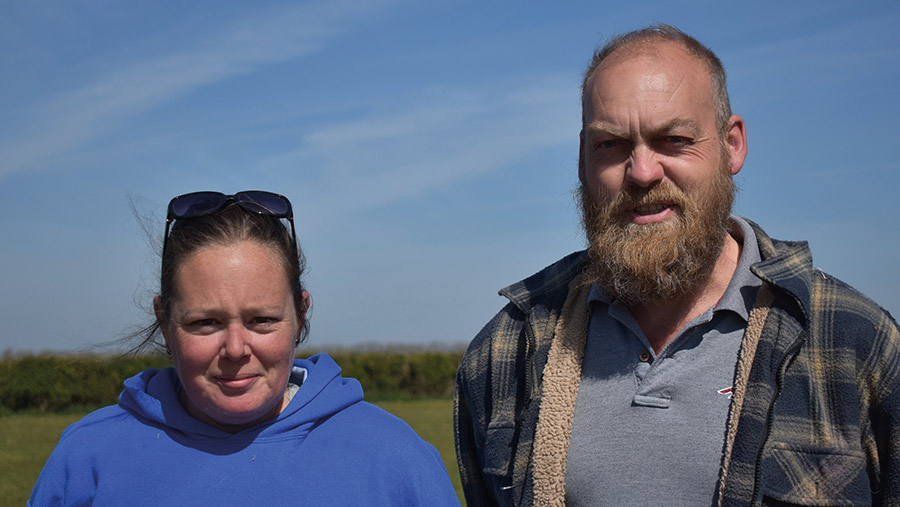 This figure, they say, is unsustainable for their herd size and they would be forced to sell the cows.

“Thirty-five cows don’t bring in that sort of money. Where do you get that money from?” said Mr Walker, who farms 49ha Flaxland Farm, near Barry, where he also keeps 130 breeding ewes.

Attempting to comply with the regulations will be too expensive for the business, he claims.

“We’re looking at the kids probably still paying off what we’d spend. It would be far more stressful having to pay all that money back than getting rid of the cows.”

The Welsh government has committed £11.5m to help farmers comply with the new rules, but this represents just 3% of the estimated £360m cost to Welsh farmers.

“There’s clearly nowhere near enough money to go around, and the total estimated bill is more than Wales’ annual farming budget,” Mr Walker pointed out.

“The margins are tight on lowland sucklers as it is. We’re looking at spending tens of thousands of pounds to comply. Is it really worth it?”

Mr Walker is the third generation of his family to farm the land and he says that pollution had never been an issue.

“We’ve never had a pollution incident here. The river near us has been tested many times and never comes back with any problems,” he said.

“I, like so many other farmers, take our responsibility to look after the environment, including our waters, very seriously.”