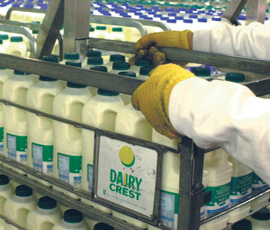 A challenging trading environment in the six months to 30 September brought a drop in profits for Dairy Crest.

The firm reported profits of £19.1m against £22.7m in the corresponding period of 2011 before accounting for exceptional items such as the sale of its French St Hubert business.

This sale, part of a wider ongoing rationalisation, earned the group an additional profit of £47.7m after tax, taking overall profit to £49.3m compared with £29.9m for the same period last year after accounting for other exceptional items.

At £688.2m, group revenue was down 7%, reflecting lower milk, ingredients and cream sales and again excluding the St Hubert business. The sale of St Hubert also contributed in large part to the group’s net debt falling by 79% to £75.8m compared with £365.3m a year earlier.

“The sale of St Hubert has created a more focused business and a much stronger balance sheet. We now have the ability to make UK acquisitions, but we will take time to ensure that any transaction creates value for our shareholders,” said chief executive Mark Allen.

Sales of UK spreads and cheeses overall rose by 3% while income from the group’s key brands – Cathedral City, Country Life, Clover and Frijj – rose by 11% compared to the same period last year, driven primarily by increased volumes of 10%. Two new products were launched.

However profits in the dairies division fell on sales which were 11% lower. This was in line with a strategy to reduce exposure to this sector, said the group, which aims to restore a 3% return on sales in the medium term.

Dairy Crest said that it was on track to achieve annual cost savings ahead of its £20m target and will pay shareholders an interim dividend of 5.7p, the same amount as at this time last year.

Latest news on the milk crisis