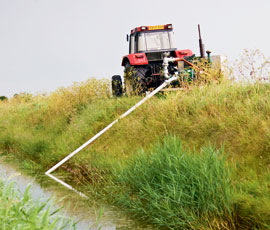 Trading water with your neighbouring farmer could become common in the future if government plans become reality.

DEFRA is understood to be looking at reforms to water abstraction trading, which would allow farmers to tap into a neighbour’s water supply.

Under the proposals, farmers with water abstraction licences would be permitted to trade part of their water allocation with a neighbour, or a farm in the same water catchment.

The Environment Agency has been limiting the number of licences it hands out to farmers to protect the wildlife in streams and rivers and it believes existing licence holders could help by sharing their water allocation.

Plans to encourage more water trading could also see farmers buying more water from other abstracting sectors, such as water and electricity companies.

The details were expected to be included in proposals for the long-term reform of the abstraction regime in the government’s Water White Paper, is expected to be released today.

“The key point for farmers is that some abstraction licence owners are not using their water allocation when maybe they have a neighbour who is short of water and wants to use their supply,” according to a source, who has attended meetings this year to discuss the details of the White Paper.

“If the market and trading environment was improved, farmers who need more water would be able to lease or buy that right from someone who is not using their allocation.”

DEFRA said the current abstraction licensing system is based on historic abstraction rights and is inflexible. Therefore, it is looking at ways to reform the system.

In the longer-term, the paper will say that water abstraction systems will need to respond to the pressures from climate change, including increased variability and reduced summer water flows by the 2030s.

It is also expected to make some additional long-term recommendations for agriculture to improve access to water and water efficiency.

These could include building more reservoirs on farm, changing crops in drought-prone areas, using more efficient irrigation systems and irrigating at night to minimise loss to evaporation.

The dry autumn has increased the pressure on groundwater supplies, the NFU has said.

“Groundwater levels have been reducing at a time they should be recharging,” said NFU water policy adviser, Jenny Bashford.

But the Environment Agency said there were no voluntary or statutory restrictions on abstractors in force in England or Wales.

“We are now very unlikely this winter to use formal restrictions as many abstractors have reached the end of their irrigation season,” said a spokesman.