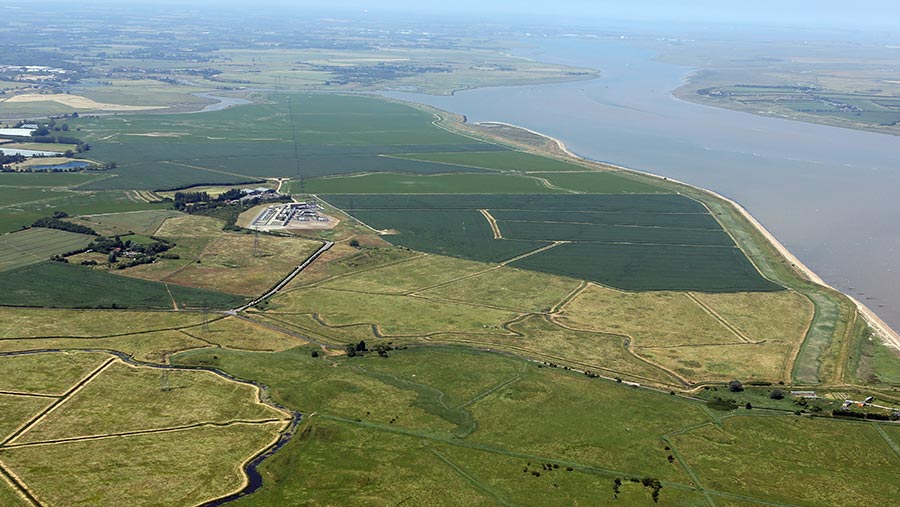 The site near Graveney in Kent © Invicta Kent Media/Shutterstock

Construction plans for the UK’s largest solar farm at a site in north Kent have been approved by the government.

The Cleve Hill Solar Park will cover almost 360ha (900ac) on farmland near Graveney and cost £450m to develop.

See also: Why farms may be liable for big business rates bills on solar

Panels will be 4m high and the battery storage facility alone covers more than 14ha (35ac).

The sheer scale of the venture meant the planning decision was classified as a Nationally Significant Infrastructure Project (NSIP) and was taken above local authority level.

Instead, approval for the site was granted by business secretary Alok Sharma.

Mr Sharma’s decision to go ahead marked the end of a three-year battle between the venture’s backers, local politicians and campaign groups.

Opposition from Kent Wildlife Trust, the RSPB, Greenpeace and the Campaign to Protect Rural England claimed the development would destroy farmland and threaten wildlife.

Helen Whately, the Conservative MP for nearby Faversham, said campaign groups had put a strong argument for improving the land for wildlife but it “clearly wasn’t enough to win”.

Two local councillors went further. Antony Hook was quoted as saying the project was “a terrible decision for local people and wildlife” while Hannah Perkin tweeted: “This is ecocide.”

But the developers, Hive Energy and Wirsol Energy, said an area of grassland, hedgerow and woodland would increase biodiversity in the area by 65%.

The developers also claimed the solar farm would create £1m a year in revenue to local authorities.