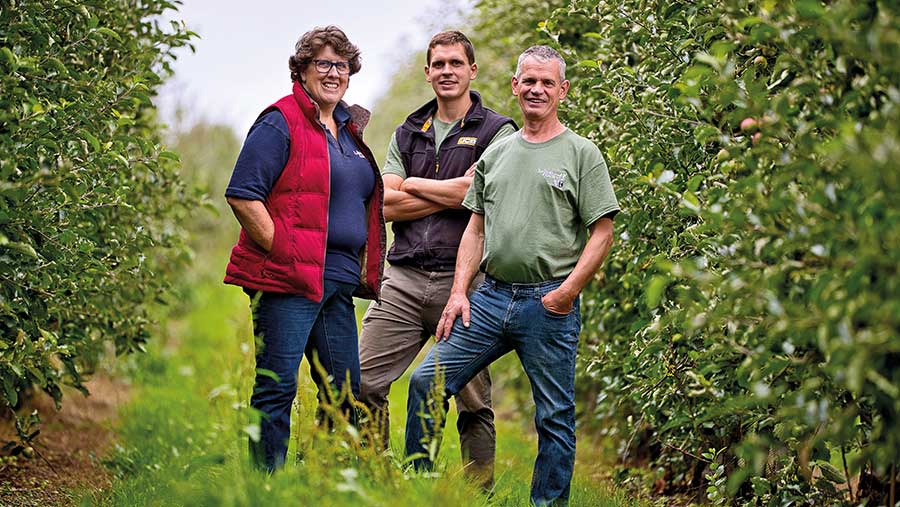 Ballingham Court Farm in Herefordshire is the home of 20,000 apple trees, where Henry and Esther Rudge have supplied fresh, juicy fruit to British drinks brand Copella for nearly 15 years.

The couple, who were awarded Farmers Weekly Mixed Farmer of the Year 2020, took the plunge to set up their 8ha apple orchard after searching for an enterprise to diversify from their traditional beef, sheep and arable farm.

Reducing reliance on government subsidies and identifying niche markets on the 173ha mixed farm in the beautiful Wye Valley has always been at the forefront of the Rudge’s family business.

So, when an opportunity arose in 2006 to grow fruit for Copella due to increasing demand for British growers, the family seized the chance and signed a contract with them.

Today, the family sell 600t of apples to the juice manufacturer on an annual basis.

They also press and bottle a further 15,000 litres of their own-brand juice, using a neighbour’s pressing-facility, which is sold via an honesty box at the top of the farm lane.

The variety is specifically bred for pressing, with large, sweet fruit, bursting with juice.

On arrival from Holland, the trees – which have about a 25-year lifespan – were dry rooted, so the family soaked them in a water bath overnight to allow the roots to take up water.

Trees were then planted at a rate of 2,230 trees/ha, in rows 3x1m apart, on a sloping field, helping to reduce frost damage.

A support trellis was established at both the top and bottom of the trees to prevent the rather shallow-rooted trees from toppling over across the sandy loam soils.

Ten years ago, the Rudges stopped applying organophosphates to apple trees for the control of red spider mite in a bid to improve populations of beneficial insects and reduce reliance on artificial chemicals.

They now leave the length of grass in the orchard significantly longer than before to provide habitats for beneficial insects such as earwigs and ladybirds, which act as biological control agents to keep pest populations at bay.

They have also repaired and planted more than 4,000m of hedgerows, which has greatly improved insect biodiversity.

Furthermore, Henry Rudge explains how natural pheromones are hung from some apple trees to deter pests such as the codling moth.

“We monitor pest levels using traps on farm to indicate whether threshold levels for certain species are reached so we only use a spray when absolutely necessary,” he adds.

When it comes to diseases, scab and mildew pose the biggest disease threats.

A copper spray to control mildew, scab and canker is applied to trees every eight days between April and June, which totals about 14 sprays.

Canker can be an issue on some trees, but infected areas are cut out of the bark, or in bad situations, the whole tree is removed to stop further disease spread.

Weeds generally do not pose a threat to the apple orchard, but at times, volunteer oak, ash and holly trees are removed and a glyphosate spray is used directly between the trees to keep weeds at bay.

Mr Rudge uses a mechanical pruner each year in May when the trees are in blossom.

Pruning at this time of year may seem unusual, but too much fruit development can weaken tree stems, so reducing the number of apples produced is beneficial for overall tree health.

Mrs Rudge highlights the importance of weighing up the benefits of mechanical pruning against hand pruning with its associated labour costs, as apples are a relatively low-value output and tree regrowth is vigorous.

Trees are also irrigated, with the first water applications carried out in May last year, to prevent drought stress, which would otherwisw lead to huge detrimental yield losses.

Pollination plays another major role in orchard management since trees require cross-pollination from other varieties.

This is why for every 10 trees planted, a pollinator variety of either Idared or Crab Apples are grown.

Bees also play their part. Six boxes of bumblebees are purchased each April to pollinate the fruit trees, and a local beekeeper who’s bees roam in close proximity to the farm helps to further pollinate the orchard.

Bumblebees are preferred over honeybees due to their ability to work at a lower temperature of 2-3C compared with more than 6C for honeybees.

Harvest begins in October and lasts for a six weeks, with average yields reaching 75t/ha.

“The trees bear fruit in their second year, and for the first five years, apple yields continue to increase,” explains Mr Rudge.

“This gently builds you up for apple harvest each season – preparing you for the new job on the farm,” adds Mrs Rudge.

All fruit is handpicked, with about 30 people on site at any given point during harvest.

This contrasts with cider apple harvest, where a mechanical harvester shakes the trees, collecting the apples as they fall.

As the weather has become warmer over the past few seasons, harvests have arrived slightly earlier than usual.

The family begin harvest just as the first fruits are ready, to ensure as many are picked at their prime, aiming to get as much harvested before the clocks go back.

However, the pair admit that picking apples from the very top of trees can be a challenge, so in hindsight having the wirework and trees slightly lower would have been beneficial.

Apples are then stored from October until July. Copella used to take the fruit directly from the farm straight after they were picked as well as provide the apple harvest boxes.

However, the dynamics changed three years ago when the company sold the pressing facility.

This meant fruit was no longer directly collected from the farm, forcing the family to pay for their own off-farm storage as well as purchase their own harvest boxes each year – which totals more than 1,950 boxes.

Due to the success of their apple orchard, in 2007 the Rudge family established a 3ha organic pear orchard selling dessert Conference pears to various box schemes, primarily Abel and Cole.

Pear harvest is carried out by a team from a neighbour’s farm and in-house by family members, beginning in September, before apple harvest.

Fruit is then sent to a neighbour for grading, with some seconds pressed and bottled and sold as juice from the farm lane.

Frosts during flowering poses the biggest risk and bad hailstorms can cause the fruit to fall from the trees, leading to damaged fruit and price penalities.

Due to their earlier harvest, susceptibility to drought and higher-value fruit, the family prioritises irrigation of the pears over its apple orchard.

The 2021 Farmers Weekly Mixed Farmer of the Year Award is now open for entries.