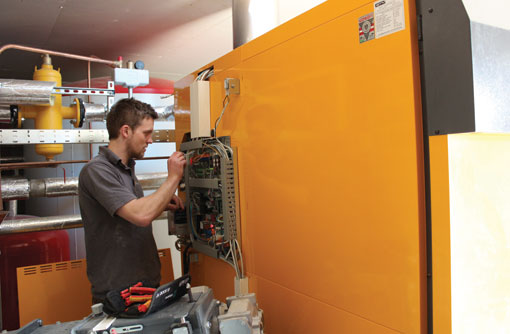 The diversified organic beef and arable farm is now on course to become energy-neutral, which will be quite a feat given the higher-than-normal energy requirements needed for the range of activities across the business.

Alongside the main farmhouse there are also two flats, two cottages, a conference facility, office units, a livery yard and a number of farm buildings that all require heat and power to varying degrees.

Mr Mann initially considered all renewable energy options, but he dismissed wind power due to insufficient wind at the site. Instead, consultant and project management firm Butler Sherborn Energy was called in to help appraise investment options in solar PV and woodchip biomass for electricity and heat production respectively.

He decided to install 50kW of solar PV on a new monopitch barn and two sets of 10kW arrays on a new “energy centre”, which also houses a 200kW ETA Hack biomass boiler, all designed and built by renewables specialist Fair Energy. The boiler feeds a district heating system that supplies all existing buildings and with capacity for future development.

Government changes to Feed-in Tariffs (FiTs) at the end of last year and early in 2012 led to a phased project start-up and somewhat rushed installation of the solar PV, but eventually enabled the farm business to receive higher tariff rates.

The 70kW of solar arrays cost a total of £213,000 to install, but is expected to pay for itself in seven to eight years (see table 1). Maintenance, cleaning and operating costs have not been included in these figures, but will be carefully monitored over the coming years, Mr Mann says.

He will also trial a product that claims to improve the solar panels’ performance by keeping them clean and dust-free and making the cleaning process easier.

Mr Mann wants as much as possible of the electricity generated to be used on the farm to insulate the business from external energy price rises. Currently he is not exporting to the grid, although he is assessing the economic value of having an import/export meter at an annual rental charge of £250. “Calculations show that if we can use more than 85% of what is generated, the potential income from exporting the surplus is too small to justify the cost of the meter, with export values at 3.2ppkWh.”

In addition to the financial benefits, the combined output from the solar PV arrays is estimated to cut CO2 emissions by 45t annually.

As well as the solar PV, some £162,000 was also invested in a 200kW ETA Hack biomass boiler, running on woodchip produced primarily from the farm’s 25ha of mixed deciduous woodland – which ranges from 10 to 100 years old.

About 80-100t of woodchip will be needed annually and Mr Mann says that 75% of this will be home-produced at a value of £50/t (felled, split, stacked and chipped) and the remainder will be bought-in timber chipped on site at a combined cost (timber and chipping) of £70/t. Total annual chip cost is estimated at £5,500.

“Being organic effectively rules out growing biomass such as miscanthus or willow, and establishment is tricky and unpredictable,” he says.

Timber is stacked “ride-side” for 12 months to dry and then chipped at 30% moisture content and to G30 size for the boiler. It is stored in an existing farm building and transported to the boiler hopper in a 10t grain trailer as required – due to the bulky nature of woodchip, these trailers only actually hold 4t of woodchip, equivalent to about a month’s supply in summer.

Mr Mann has been pleased with performance so far, although acknowledges payback will ultimately depend on how efficiently the boiler heat output is used in future. Currently six properties are eligible for the Renewable Heat Incentive with heat meters. A further one has a heat meter but is not eligible for RHI. He plans to add a further four eligible properties over the next two years.

Over April, May and part of June this year, 30,000kWh of heat, either as hot water or heating, was consumed; 50% by the farmhouse, office and farm buildings (one not eligible for RHI), providing a saving to both farm and domestic bills (see table below).

The project hasn’t been without its challenges, though, says Mr Mann. Trenching around farm buildings was one of those issues, especially as trenches have to remain open until all pressure-testing of pipes is complete. Connection within each building can also be quite complex, although this was dealt with as part of the installation contract.

Administrative issues are also a factor to consider, as he found the RHI application process difficult and there was very limited co-ordination between the distribution network operator, the electricity supply company and meter suppliers until one individual took control, he says. “Future-proofing” the system can also be a challenge.

“But we’ve done our bit for the environment, are improving energy consumption, and are helping the bottom line for the business as well,” he says. A number of other positive points are shown in the box below.