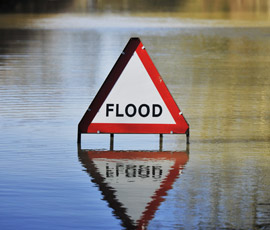 Farmers in at risk flood areas will soon benefit from a levy-backed flood insurance scheme designed to make insurance available to all.

Those with land or property in high-risk areas may have found they were unable to get affordable flood insurance after the current agreement known as the “statement of principles” runs out in summer 2015.

However, after lengthy discussions with the insurance industry, the government agreed a deal which will see those in high-risk areas able to access flood insurance.

The new scheme is known as Flood Re and means insurers will pay a levy to subsidise premiums for high-risk individuals, which will be collected into a not-for-profit fund which pays out on flood insurance claims.

“There are still areas to work through but this announcement means that people no longer need to live in fear of being uninsurable and that those at most risk can get protection, now and in the future.”
Environment secretary Owen Paterson

The levy has attracted some criticism as it will effectively see a £10.50 rise on the premiums of all other households – even those which are not at risk.

It also will not affect houses in band H, the highest council tax band, meaning some farmers could end up paying high premiums on high-value farmhouses, as they will still be decided on a case-by-case basis.

Commercial property is also exempt from the new rules as it is seen as much lower risk and easier to flood-proof than homes.

“There are still areas to work through but this announcement means that people no longer need to live in fear of being uninsurable and that those at most risk can get protection, now and in the future,” said environment secretary Owen Paterson.

The insurance industry was equally pleased with the solution, but also stressed the need to iron out areas of disagreement.

“Getting to this stage has required compromise by both sides and there remain issues that need to be overcome,” said Otto Thoresen, director general of the Association of British Insurers, which took part in negotiations.