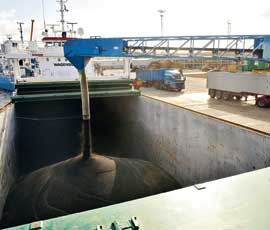 Grain markets lost further ground this week as they waited for a US Department of Agriculture report. As Farmers Weekly went to press on Wednesday(11 September), the ex-farm spot feed wheat price was averaging about £147.50/t but there was a widening regional range from £142-158/t ex farm.

The highest prices were on offer in the north of England and Scotland where the wheat deficit meant that in many cases, selling milling wheat was not worth the deductions risk, said Gary Bright, managing director of GrainCo.

Wheat quality this year is better than last, although proteins are an issue in some areas. The full spec milling premium has shrunk to between £9 and £12/t over feed values while soft wheats are commanding £4 to £5/t over feed.

Traders estimate that the UK wheat crop is about 85-90% harvested although the percentage in the north of England and Scotland is more likely at about 70%.

With many UK millers having established new import contacts last year, there was a risk some may stick with those new suppliers, said Mr Bright.

The UK is not currently competitive on wheat export markets but the prospect of a surplus of just 500,000t is not seen as a problem by the trade. There is good demand for feed barley for export, requiring large cargoes but sometimes struggling to fill even smaller boats as growers hang on to grain with memories of last year’s high prices.

Egypt has been a keen buyer of wheat, buying mainly from the Black Sea region.

Oilseed rape markets were also down on the week at an average of £291.70/t ex farm.

See our Prices and Trends page for the latest futures prices