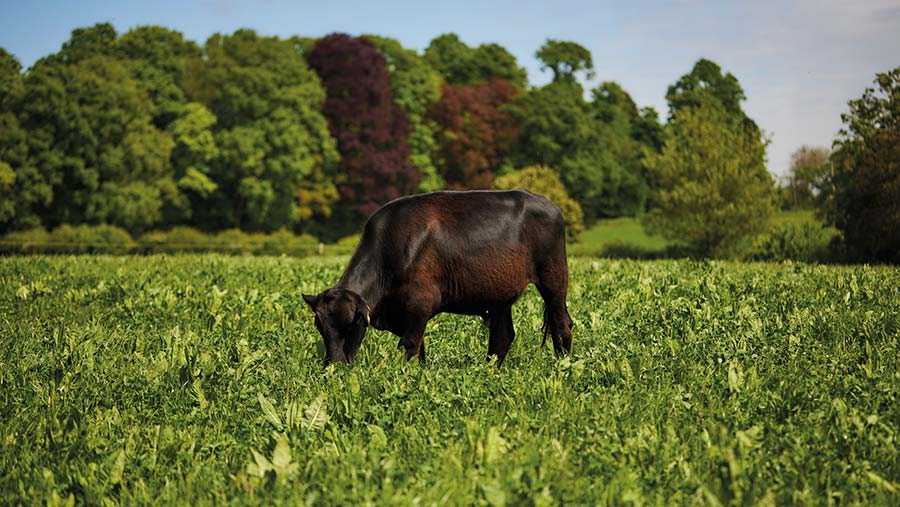 Significant premiums are being paid by some butchers, restaurant chains and retailers for regeneratively farmed beef.

The sector remains in its infancy, and what exactly is involved in regenerative practices is still often a matter of opinion.

However, it is clear more opportunities are emerging for producers and good margins can be made.

See also: Public access in rural areas how to avoid and deal with problems

How systems are calculated and monitored also poses some questions and there has yet to be any form of industry standardisation around accreditation.

However, some pilot schemes such as A Greener World are now being implemented.

The premiums paid to producers for regeneratively farmed beef vary between outlets, and is commercially very sensitive.

But at the top end it can be 30% more than the AHDB average deadweight price.

Currently, the GB all-prime average beef price is about 440p/kg. A 30% uplift would put top prices paid for regenerative beef in excess of 570p/kg.

Farmers considering joining one of these schemes will typically be required create a plan showing how their farm will follow regenerative practices.

These are usually done on a case-by-case basis and could include factors such as carbon auditing and building up organic matter in the soil.

National Beef Association chief executive Neil Shand says regenerative agriculture is probably going to be the way ahead in some geographical areas.

But he is concerned that the industry doesn’t have reliable calculators for carbon sequestration and even basic carbon auditing on farm, as well as for improved animal and staff welfare.

Mr Shand says: “I would love to see Westminster and all the devolved assemblies putting as much money as possible into creating reliable carbon calculators that will give us a foundation for the industry to measure accurately where it is.

“I think we all want to see the industry produce sustainable food and we need the environment and agriculture to work together,” he says.

It is right that retailers both recognise and support producers for doing the good things well, says Mr Shand, and reward farmers for good practice and environmental gain.

GrassRoots Farming was established by three farmers to act as a link between livestock producers and those in the supply chain looking to source regeneratively farmed meat.

It is presently offering long-term contracts at a fixed premium price to producers.

Farmer Alastair Trickett is one of the founders of GrassRoots Farming and is working on a Nuffield scholarship looking at how supply chains can collaborate with farmers to create market incentives that will then scale regenerative agriculture.

Mr Trickett says: “We need to get more money to the farmers at a grassroots level.

“The way to do this is to work with supply chains and brands that genuinely want to work in a different and more collaborative way, which ends up with more money in farmers’ pockets.

While the sector lacks clarity on standardisation for tools used to monitor both regenerative practices and carbon levels on farm, some tools are using GWP (Global Warming Potential) 100 basic calculations – others are using different variation such as the GWP star (GWP*) calculation.

“I think it’s awash with difficulties and I think what we have got to do as an industry is tread the line between having something that is workable, so we can move at pace to bring farmers on board with market incentives, while treading the line between that and diluting the potential of what regenerative agriculture can be in order that more brands can access it,” says Mr Trickett.

GrassRoots Farming has introduced a set of farming standards in line with some of the key regenerative principles such as use of cover crops, no- or min-till systems, encouraging biodiversity, and incorporating livestock into arable rotations.

However, it also takes a context-specific view, and the primary objectives will vary significantly between farms.

Some will focus on carbon sequestration and organic matter, while others may focus more on issues such as on reducing run off into rivers or increasing biodiversity.

While most retailers are yet to offer specific premiums for regenerative farming, Morrisons has recently started to look at paying more to producers for environmental gain.

The supermarket chain announced a 10p/kg premium for dairy-bred beef that is slaughtered under 18 months, to encourage sustainable production.

It is likely that regenerative farming labels and other similar initiatives will be developed by other retailers, with an increased focus on sustainability and the environment, during the next few years.

There is an increased positioning of low-emission and climate-neutral beef products on shelves around the world, according to Rabobank’s quarterly global beef update.

The analyst did however recognise that it is hard to turn sustainability and emission commitments into action in the current climate.

Angus Gidley-Baird, senior analyst in animal protein at Rabobank, says: “In our view, the full cost of production (sustainability initiatives aside) is not at present being passed onto consumers.

“Consumers’ willingness and ability to pay is likely to be tested in 2022 as inflation levels climb around the world.” 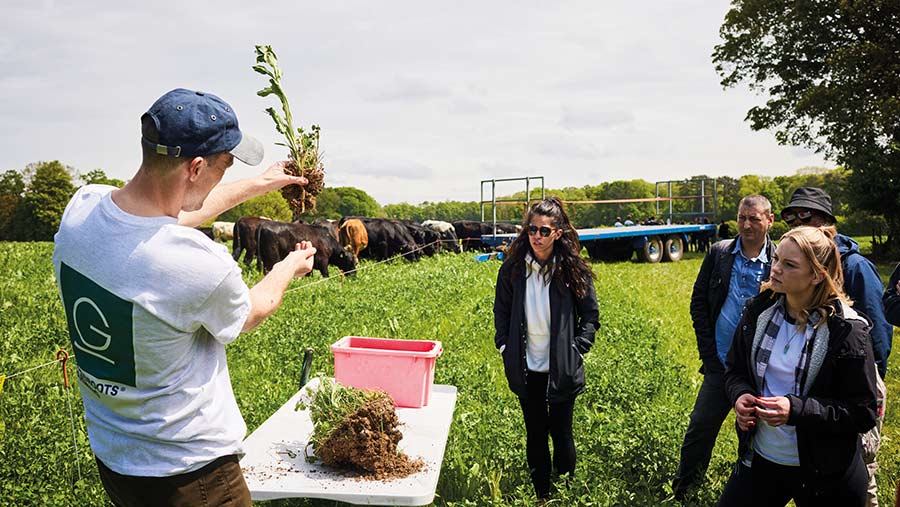 Restaurant chain Honest Burger has moved to source only British regeneratively farmed beef in 12 of its restaurants.

The firm, which has 40 branches nationwide, has committed to serve only beef from regenerative farms in all of its restaurants by early 2024.

About 44 cattle a week are expected to be required to fulfil demand.

It will require about 20 producers to supply the beef and will purchase the whole carcass, using about 70% of for its burger blend and selling on the steak cuts.

The price paid is a set premium over the AHDB recorded base price, with a maximum carcass weight of 350kg.

The chain is working with Grassroots, which has developed its own certification to establish specific farming standards and goals for the supplier farms.

“We’re buying the whole animal direct from our farmers, which means we can influence how they farm and pay them a fair price. Farmers are now an integral part of our team – as they always should have been.

“We’re doing all this to improve our supply chain, reducing our carbon footprint and incentivising the right outputs such as soil health, biodiversity and animal welfare.” 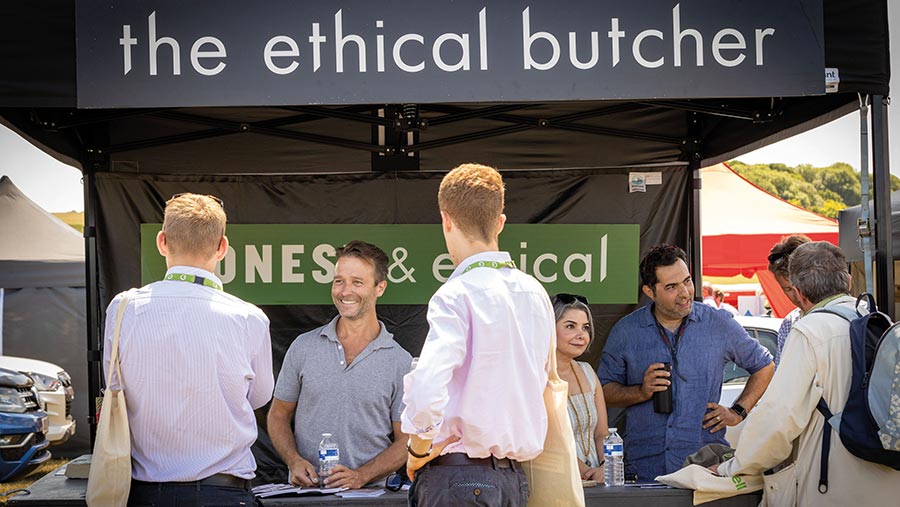 Online butchery shop The Ethical Butcher has a similar policy for sourcing meat, with a key focus on sustainable farming.

The business uses only pasture-fed livestock and says the flavour of the meat is one of its key marketing points. It is supplied by 14 farms and is looking to bring more on board.

Pricing is calculated on an individual basis depending on the product and service offered, with the firm paying up to 30% above the average deadweight market price.

One of the company’s founders, Farshad Kazemian, says: “There is no doubt that Covid has helped regenerative farmers and direct-to-consumers businesses like The Ethical Butcher to flourish.

“What is interesting now is that with the war in Ukraine and consequently increasing prices of commodities, fertilisers, and feeds, this is now the best time for farmers to consider switching to regenerative farming.

“This way they can get a better price, spend less on chemicals and fertilisers and produce a greater product which can help to save the planet.

“It will be a win-win for everyone, the only losers would be agri-tech and agri-chemical companies,” he says. 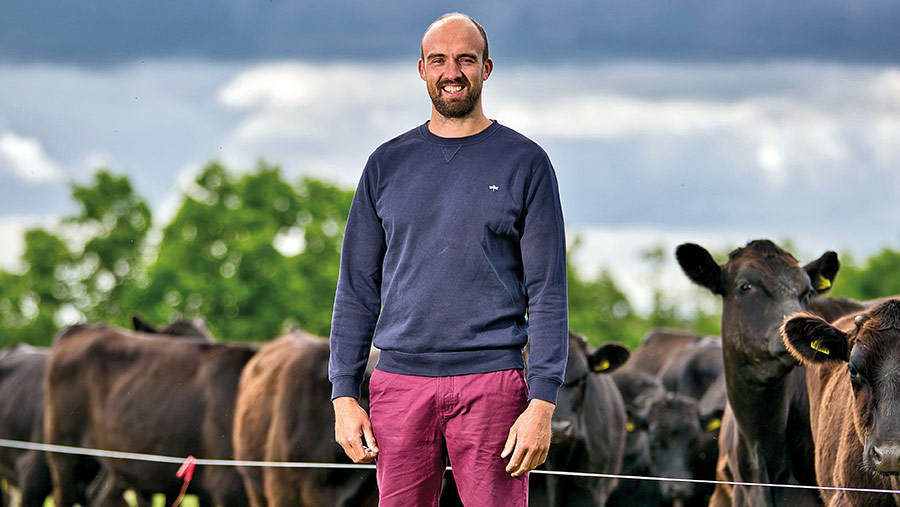 Aled Evans, who with his brother Iwan won Farmers Weekly Beef Farmer of The Year in 2021, is one of the producers supplying cattle through the Honest Burger regenerative beef scheme.

Mr Evans, who farms at Rest Farm, Whitland, Carmarthenshire, says: “It has been very interesting working closer with the end consumer.

Working with Honest Burger has given us a bit of insight into feedback on eating quality and what their customers want in terms of consistency.

“In return, having that little bit of stability in pricing helps us with budgeting moving forward as well,” he says.

“We believe in a regenerative system, it’s about the system in its entirety. By farming in this way, we have cut our expensive inputs like fertiliser, sprays, and feeds.

“There is an economic benefit to it, but to really get into it you have to be passionate about the big picture as well,” he adds.

Mr Evans says there is a premium paid to produce this way, but the biggest gains have probably come from changing to a regenerative farming system, rather than the premium itself.