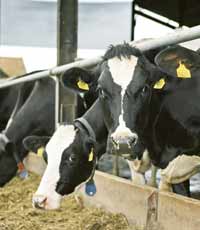 UK dairy commodity prices increased between March and April, due to tight milk supplies and strong demand, according to DairyCo’s Datum report.

Milk production in the first quarter of 2010 fell more than 1% behind last year, and annual production to March was 13% below quota, at 12.8bn litres. “While output is now rising, commentators think that peak milk supplies will fall short of normal levels,” said the report.

UK values have also benefited from tightening world and EU supplies. Exported bulk cream prices improved by £75/t (6.1%) between March and April, to £1300/t. “The normal tendency for these prices to weaken over the flush milk season has so far been totally absent.” Skimmed milk powder values rose by £50/t (2.7%), to £1900/t Ð their highest level since October 2008.

The Actual Milk Price Equivalent increased to 28p/litre in April Ð 8.9p/litre more than April 2009 and 2.5p/litre up on the month.