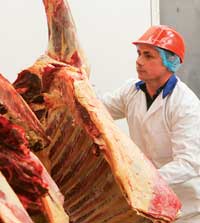 Deadweight cattle prices have reached their lowest level since August 2008, partly due to an unseasonal increase in slaughter numbers.

The average R4L steer price fell to 267.5p/kg dw in the week to 7 August, 2.2p/kg down over the past fortnight. In the week ending 31 July, estimated prime cattle slaughterings reached 34,000 head, slightly up on the previous week and a massive 25% rise, year-on-year. “Throughput for all classes of cattle increased on the previous year, with a significant increase in young bull and steer slaughterings,” said a report by AHDB Meat Services.

“Usually throughputs of prime cattle decline during July and August but the seasonal dip has not occurred so far this year. Increased availability of cattle for slaughter may have influenced the recent decline in price.”

Cattle throughputs at live auction markets increased by 11% in the week to 4 August, with young bull throughputs up by 25% and steer volumes down by 8%. Average liveweight prices improved by 5p/kg.

Meanwhile, the gap between the farmgate and retail beef price narrowed slightly between June and July, to 53.5%, meaning producers received more than 46% of the final retail price.