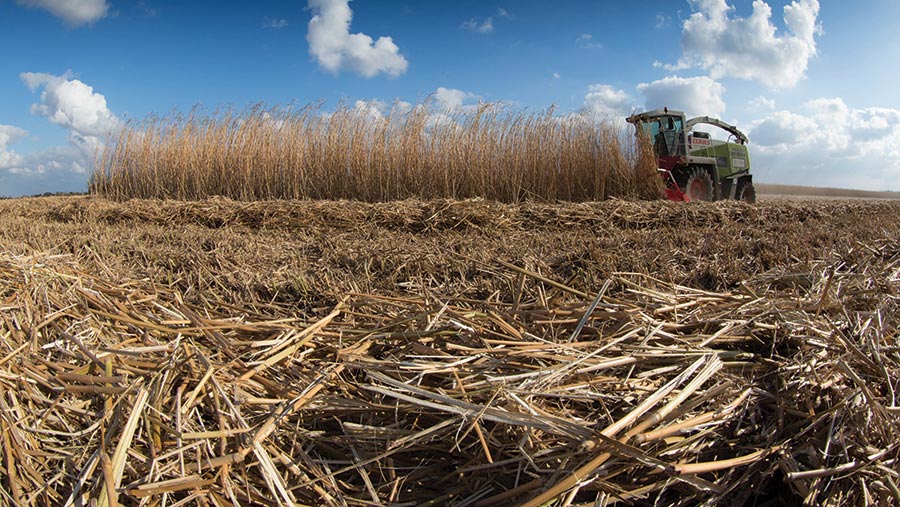 Growing miscanthus can make sense on poorer-quality land, offering farmers a financial return and a chance to do their bit for the environment.

But the government is being urged by farming unions to offer incentives through the Environmental Land Management scheme (ELM) and help develop the market for sequestered carbon if it wants to significantly expand the acreage of this and other bioenergy crops.

Climate change experts say there needs to be rise in the amount of such crops grown for biomass, because of their potential to deliver carbon savings.

In its recent report, Land Use Policies for a Net Zero UK, the independent Committee on Climate Change called for average planting rates of miscanthus, short-rotation coppice and short-rotation forestry to rise to 23,000ha/year between 2020 and 2050.

No data is available regarding UK-wide planting areas of miscanthus, also known as elephant grass, but Defra statistics suggest there were just 7,149ha of the crop grown in England in 2018.

For example, the Energy Crops Scheme was withdrawn in 2013, and despite strong lobbying, Defra had resisted allowing miscanthus to be counted as an ecological focus area (EFA) under greening.

But more positive signals are starting to emerge from policymakers.

Speaking at last month’s NFU conference, the chair of the Environment Agency, Emma Howard Boyd, was asked why government policy was not more supportive of perennial crops such as miscanthus, which could play a role as soft flood defences.

She said: “This is exactly where ELMs should come in. We want to make sure we are working with Defra and others, in joining up these dots and seeing new markets and new rewards [for perennial crops].

“I hope this is something we can start moving on as quickly as possible.”

While the primary market for miscanthus is for large-scale heat and power generation, the crop can also be used as a construction material and for livestock bedding.

It says the business model for the crop has been developed to the point that it more than competes in commercial terms with most farm enterprises (see case study, below) – but if the government is to meet the targets set out for its uptake, it will need favourable treatment in the ELMs framework.

William Cracroft-Eley, Terravesta chairman, points out miscanthus is a multi-faceted environmental crop that can play an important role in tackling climate change by sequestering carbon and helping to improve soil health.

“Biodiversity in miscanthus, above and below ground, is also much richer than the intensive arable or grass crops that it is likely to displace, and this needs to be recognised,” he says.

“It is also a crop that happily withstands winter flooding, while its root systems improve soil water holding capacity and hold back water flow, meaning it is an excellent strategic option for protecting vulnerable communities.”

Jon Hatt has been growing miscanthus at Coombe End Farm, near Goring Heath in Berkshire, for about 15 years and says it is a straightforward crop to grow, offering significant benefits in terms of locking up carbon and helping wildlife.

Mr Hatt estimates it costs him £1,500/year for a contractor to harvest and bale the crop and another £1,000/year to cover carting, loading, storage and composting costs.

Mr Hatt agrees that government incentives to encourage farmers to plant miscanthus would be justified and would help to boost the earning capacity of the crop.

Growers should also be able to get paid for carbon credits, alongside ELMs payments to reflect the environmental and soil benefits it brings, he says.

First steps
His miscanthus enterprise began in 2006, when he planted one field of about 6ha as a trial, using a 40% establishment grant available under an old Energy Crops Scheme.

“The government were particularly keen on encouraging miscanthus at the time and we were looking for alternative options for some poorer arable ground to help spread risk,” he says.

“We are near Didcot power station, and at that time they were looking to use miscanthus to co-power it.”

Spotting what looked to be a potential opportunity, Mr Hatt originally signed up a supply contract with Bical, which was promoting the crops and supplied the rhizomes.

Crop establishment
The establishment of the crop was straightforward with the rhizomes planted using a converted potato planter.

The crop was sprayed to control weeds in the first year, but has required no further treatments since.

Although rabbit and deer damage can be a problem during the establishment phase, Mr Hatt had no problems and the crop now seems to be ignored by pests.

Miscanthus can be ready to harvest in year two, but Mr Hatt did not harvest his crop until year three.

“Although you can get a harvest in year two, in our case there was not enough straw there to justify the cost,” he says.

Specialist harvesting
The crop starts to shoot in the spring and grows to 3-4m high by September.

Harvest takes place the following March or April, when a specialist contractor uses a forage harvester setup to cut the straw into 30cm lengths, which are then left in the swath until they are dry enough to bale.

“Harvest in year three was a learning experience and we found it not as cheap and simple as we had originally been told it would be,” says Mr Hatt.

“Rather than out-of-season use of mowers and balers, we discovered we needed a specially set-up forage harvester and heavy-duty, big baler, as miscanthus can wrap around and wreck machinery quite easily.

“Once cut, the straw needs to drop to below 15% moisture content before baling, so if it rains, it also needs to be moved to get enough airflow to dry it out.

“In addition, the baled crop needs to be stored inside or sheeted, as a wet crop will not be saleable.”

Mr Hatt says he was originally told that the crop would require no fertiliser.

“But we found yields dropped off after four or five years.

“The theory is that dropped leaves form a compost layer, so we spread green waste compost post harvest at a rate of 15t/ha to help it break down.

“This reversed the yield drop, so we now continue to apply solid digestate annually.”

While long-term contracts can give growers security, after Bical went into administration in 2009, Mr Hatt chose to find his own markets for the crop.

“Initially, we sold to an East Anglian straw-burning power station [the original aim], but haulage can knock a big hole in the sale price,” he says.

“Since then, we’ve looked for more local buyers.”