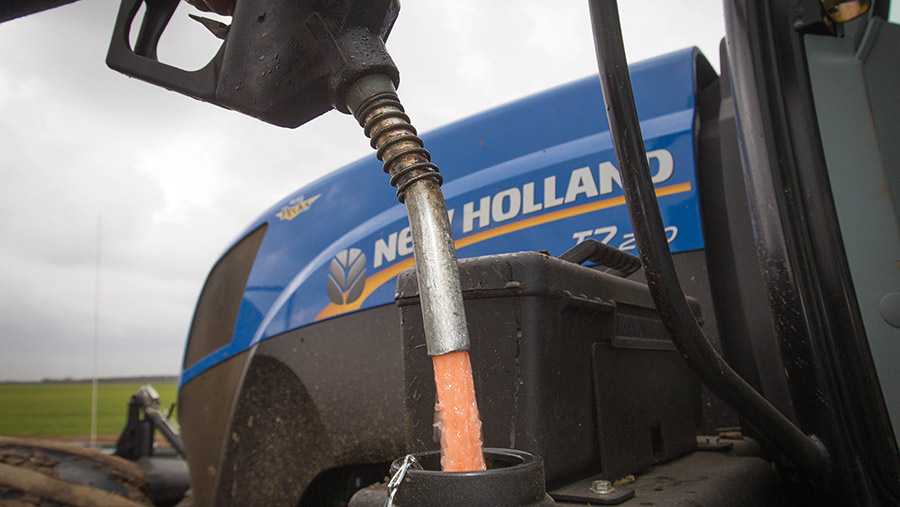 Red diesel suppliers are reporting disruption to farm deliveries in some parts of the UK, prompting a warning to farmers and agricultural contractors to avoid last-minute orders.

One Norfolk-based contractor who contacted Farmers Weekly has been advised of a three-week lag in securing an order of red diesel from his regular supplier and has just 500 litres to fuel four tractors through to mid-October.

“It will not last until the middle of October,” he said. “It’s a busy time on farms; there is lots going on, including spraying, cultivations, drilling and hedgecutting.

“The farmers are supplying the food, but if they are short of red diesel they cannot feed the nation.”

The situation has been created by pressure on tanker drivers to keep supplies topped up at fuel forecourts amid panic-buying by motorists.

Welsh machinery ring PMR, which acts as a fuel buying group across Wales, said it had advised members that deliveries were likely to take one or two days longer than usual.

Lead co-ordinator Joanne Davies said: “We have been in touch with multiple fuel companies we deal with in all areas of Wales and have been told there is plenty of supply, but deliveries are taking a little longer. Some are saying they can deliver this week, some not until next week.”

But fuel providers in other regions insist they are able to fulfil orders as needed – for example, Barton Petroleum, which supplies parts of England, including Leicestershire.

“We are busier than normal, but there is no issue in getting red diesel to our customers,” said a spokesperson.

The National Association of Agricultural Contractors said it had not been made aware of issues with deliveries, but told its members to plan ahead.

Meanwhile, amid Twitter reports that some farmers have been using red diesel off-farm out of necessity, Defra is advising users that there is no amnesty on its use in non-agricultural vehicles.

Watch out, there’s a fuel thief about

Its rural affairs specialist, Rebecca Davidson, said this was a pattern seen during previous periods of fuel price rises and shortages.

She urged farmers to be vigilant and to strengthen security should this pattern be repeated.

In 2020, even during a year of lockdowns, the average cost of individual diesel thefts in the countryside was £2,120.

NFU Mutual advises fitting a fuel tank alarm; remote electronic fuel-level gauges will set off an audible or monitored alarm if the fuel level in the tank suddenly drops or falls below a defined level.

Tractors and powered machinery should also be locked up and out of sight from public roads and footpaths when not in use, to prevent thieves draining fuel tanks.