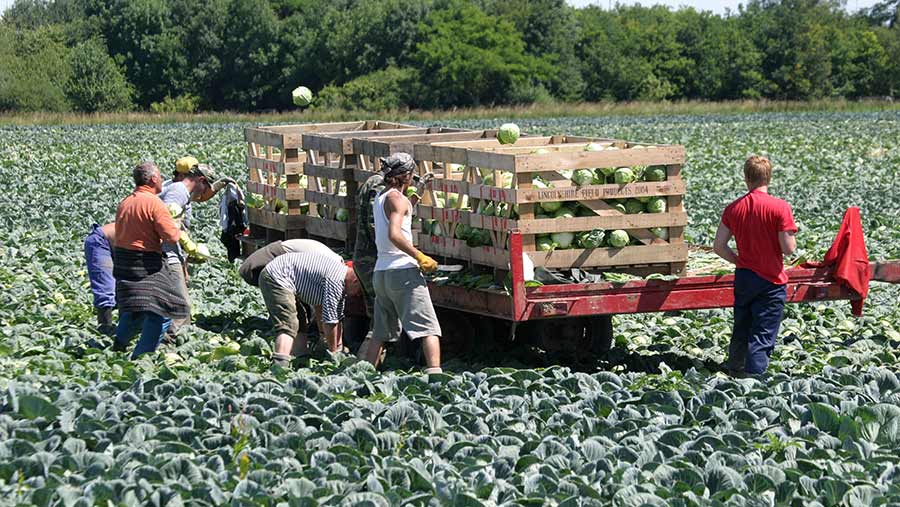 British food prices will have to rise to cover soaring wages for farm workers, industry leaders have warned.

The warning came as a Lincolnshire-based field veg grower hit the headlines for offering £30/hour amid the post-Brexit labour shortage.

TH Clements and Son, near Boston, advertised a post on social media for £240/day to pick broccoli.

See also: Visas for poultry and fuel workers ‘too little, too late’

The advert was picked up by the national media, which pointed out that it was equivalent to a £62,000 salary to carry out the manual work.

British Growers Association chief executive Jack Ward said the job advert showed how difficult recruitment had become since Brexit – and was a reflection of just how serious the situation was becoming on farms.

Growers found themselves trapped because they had contracted commitments to supply, he explained.

“Farms are squeezed because they cannot choose to opt in or out of a contract, and the crop will spoil if it is left unpicked.

“Retailers will ultimately find another supplier, whether British or otherwise, to fill their order books, so the grower is faced with a stark situation. In reality, it means they have to pay higher wages or drop contracts.”

Before the rises began, wages made up about a third of production costs while margins for field-scale fruit and veg production are, historically, staggeringly low at just 1-2%.

Absorbing or passing on those labour costs was virtually impossible in a market of static or declining prices, Mr Ward stressed.

But he said ultimately prices would have to rise in line with new labour costs, unless the policy towards overseas workers changed.

The difficulties extend to all areas of farming.

Wage costs had risen by 10-20% in the sector to attract British workers, he said.

The RABDF has been working with economists and recruiters to try to solve the situation. But dairy farm roles are complex and Mr Brigstocke said the recruitment agencies had been astonished at the wide range of skills required.

“Dairy farmworkers need a skillset that covers everything from manual work, through animal husbandry to solving issues with hi-tech equipment,” he explained.

Finding recruits from the British labour market who had those capabilities and were willing to work on farms had proved hugely difficult.

The government was still saying robots were the answer, but the animal husbandry and manual work needed human involvement, Mr Brigstocke said.

However, he said the dairy sector was looking to new ways of solving the crisis.

It was apparent that the government would only listen to solutions and was not interested in hearing people complain about the impact of Brexit, he added.

Therefore, in addition to the wage rises, dairy units had started to put in place changes that might attract British workers, Mr Brigstocke said.

For example, some were seeing results by altering farming situations such as shift patterns to make hours more appealing, he suggested.