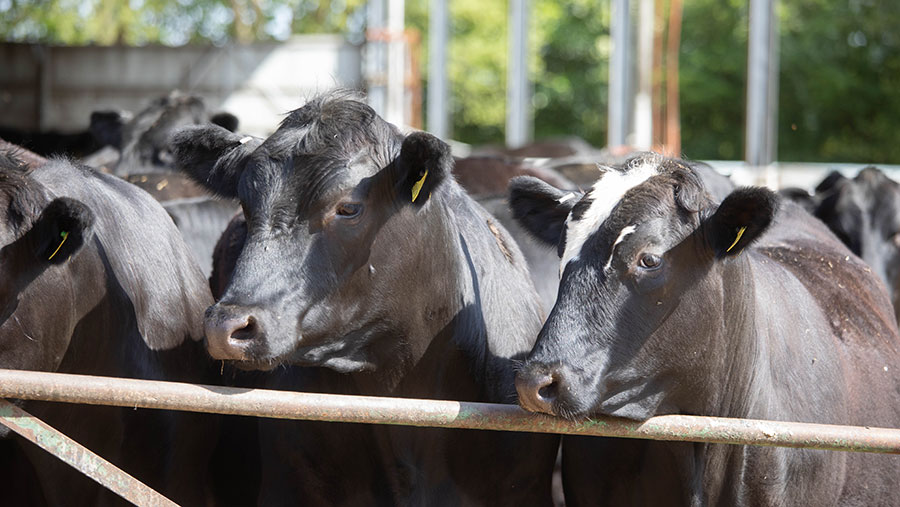 Finished cattle prices have seen further sharp gains amid soaring supermarket demand for British beef, with the farmgate price rising by close to 40p/kg in the past six weeks.

Average deadweight prices in England rose by another 4p/kg this week to take them to 355-360p/kg for carcasses in the R-bracket, according to industry sources.

Scottish prices were flat on the week at 375p/kg for animals in the same grade, while sources reported Northern Irish processors were also standing at about 360p/kg for a U-grade..

The latest moves mean the Angus premium, which has seen Scottish farmers enjoy as much as 30p/kg more for their beasts, has now shrunk to as little as 10p/kg as buyers scramble to fill order books.

Neil Shand, interim chief executive of the National Beef Association, said continued discounting on premium cuts from supermarkets was helping producers and customers, and top-spec animals were close to £4/kg.

“I think supermarkets have done a tremendous job of promoting the carcass,” he said.

Shuttered restaurants and prolonged barbecue weather have caused healthy retail demand for prime cuts, which has been a boon to British producers, as a greater proportion of meat sold in supermarkets is British compared with the food service sector.

Retail analyst Kantar Worldpanel revealed that total spend on beef in the 12 weeks ending 17 May increased by 26.9% on the year.

There was a 24% increase in steak sales – the main driver of overall carcass values – across the whole period.

A particular surge was recorded during the past four weeks, with a 43.9% increase in the volume of steaks sold compared with the same period in 2019 as a wave of supermarket discounting took hold.

The decrease in price, combined with the marketing drive and BBQ weather, resulted in 16.4% more consumers buying the product, with the volume per buyer increasing by 6.5% on year-earlier levels.

Retailers have continued to battle for dominancy of this newly enlarged sector, with Tesco and Morrisons maintaining their two-for-£7 offer on rump, sirloin and ribeye this week.

Tight supplies of finished cattle have shifted some of the power in the supply chain back to the farmer for now, said Mr Shand, giving those with a full lorry load to sell additional bargaining power to negotiate a premium over base price.

Pork production also fell by 11% to 81,000t in May as retail prices and sale volumes rose.

There was a less positive picture for lamb, with a reduction in consumer spend over the 12-week period, even as shopper numbers increased by 1.5%, with a decline in the average amount each purchased as the retail price rose.