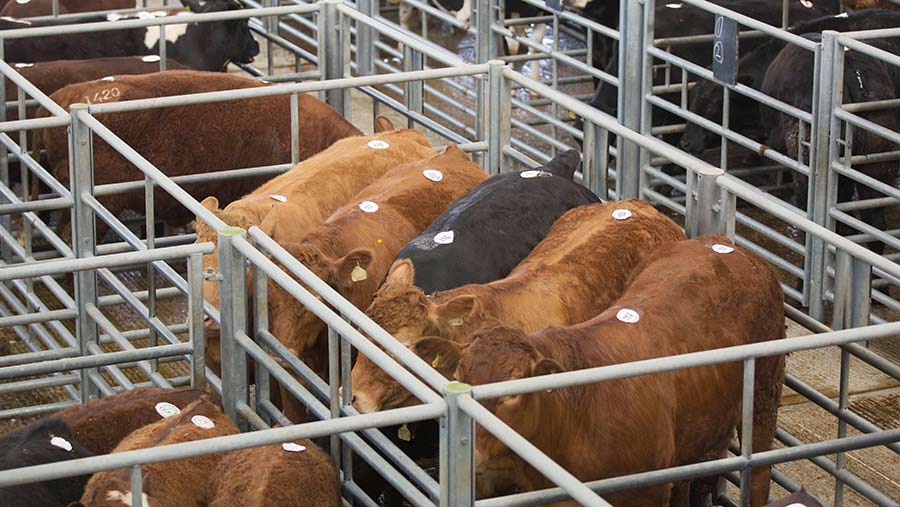 Beef finishers are likely to have to wait until late summer before prices improve, when tighter supplies of cattle and the prospect of trade with China is expected to lift values.

This week’s announcement of access to China – the world’s largest beef importer – comes as processors have cut prices sharply for the fourth week in a row, blaming good supplies and weak consumer demand.

Shipments to China won’t begin until late this year, and the current cripplingly low prices are not expected to see any significant improvement until late summer, when analysts say the effect of lower calf registrations in 2017 and 2018 will also tighten supplies.

Beef processor Kepak slashed prices by 12p/kg this week in the South West to 328p/kg for beef- and dairy-sired cattle younger than 30 months.

The Rustlers microwave burger manufacturer, who, together with ABP and Dawn Meats, slaughter about 60% of the cattle in the UK and Ireland, has now dropped the price by 20p/kg in one month, reducing the price of a typical 375kg deadweight steer by £75.

Other processors are reported to be offering similar prices.

Supplies of beef are currently high due to increased heifer and cow slaughterings, said Stuart Ashworth, director of economics services at Scottish levy board QMS.

Large stocks of imported frozen beef, brought into the country ahead of the first Brexit deadline at the end of March, are also still feeding into the system, he said, and up to 7p/kg of the losses can be attributed to a collapse in the global leather market.

Demand has fallen sharply as consumers move to more sports and leisure footwear and concerns grow about the environmental effects of the tanning process.

Beef is also suffering from falling demand, as consumers are assaulted by a variety of negative messages about red meat, including warnings over obesity, cancer and the effect of cattle on the environment.

Finishers across the country are reporting lengthy delays to book cattle into abattoirs, as processors and analysts say demand for beef is falling in supermarkets and restaurants.

Ulster Farmers Union beef and lamb chairman, Sam Chesney, said a Northern Irish abattoir near to him had cancelled cattle previously booked in for Monday (17 June), and U- graded beef heifers were being quoted at just 332p/kg this week.

“I would say most beef farmers are definitely in the red at the moment,” he warned, adding with prices 26p/kg below last year’s levels, he was making £100 less per animal.

The most recent bulletin from retail analysts Kantar Worldpanel, for the 12 weeks ending 19 May, showed beef is losing ground to chicken, turkey and fish.

Roasting joints are the key driver of volume loss, with a reduction of 1.5m kilogrammes compared with last year’s sales. Steak also suffered, with a fall in sales of some 715,000kg.

Regency Purchasing Group, who supply food and services to more than 2,700 leisure businesses, are also reporting that beef demand is down by 5%.

Alex Demetriou, managing director, said: “It appears as if this has been driven by the vegan, vegetarian and flexitarian movement, which is becoming increasingly popular as a lifestyle choice, rather than any kind of trend.”

He said a large-scale positive advertising campaign was needed to give consumers “permission” to start buying beef again, but farmers could also do more to produce an in-spec product that gives the consumer a more consistent eating experience.