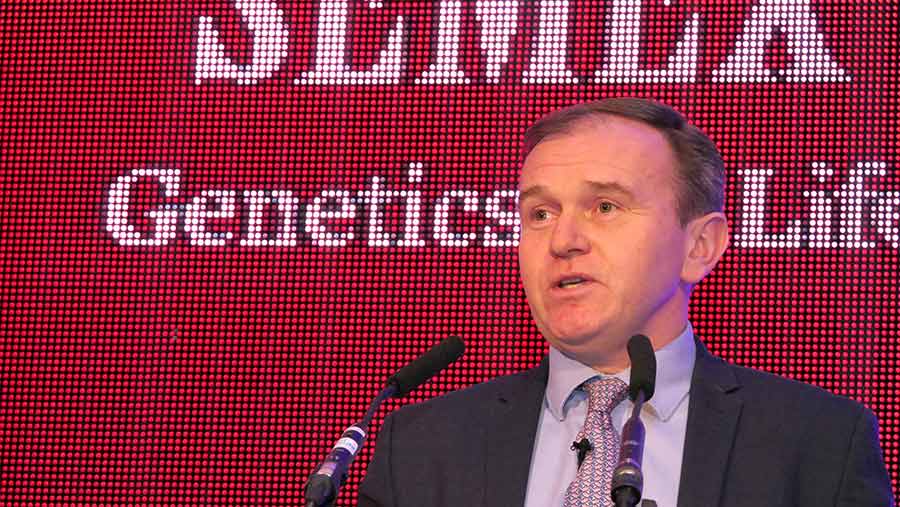 Progress on dairy contract reform has been further delayed, probably until after a Brexit deal is finalised.

Addressing an audience of milk producers at the Semex Conference in Glasgow, farm minister George Eustice reiterated his commitment to a dairy contracts consultation, saying that changes to how dairy contracts work was overdue and inevitable.

“All too often farmers are price takers – they are captives,” he said.

“[Dairy farmers] either need the ability to walk away from a processor or if you are to commit for the long term they need to commit to how that price is calculated.”

Mr Eustice indicated that an element of the reform would be shorter notice periods of as little as four weeks for dairy farmers, if they are unsatisfied with the performance of their processor.

What has Defra indicated that contract reform should address?

The minister added that it was too easy for processors to say they needed to keep up a relationship with a supermarket, because farmers would ultimately pay the price of that approach.

“If it is applied universally to everyone, whether they are a co-operative or a private company, it means that the incentive for processors to behave in a weak or craven way is diminishing, which is the right way to approach this issue.”

NFU president Minette Batters said the industry was in this situation because voluntary codes did not work.

“Farmers have been price takers for too long,” she said. “Once we get through this week [of Brexit negotiations], my god have we got to grow up and have a serious conversation at how we do regulate dairy contracts.

“Things have got to change.”

However, dairy analyst Chris Walkland said proponents of an end to discretionary pricing should be careful what they wished for, claiming that the pricing mechanisms currently used by the majority of milk processors had consistently delivered fair returns.

“Those who call for the scrapping of discretionary pricing have never undertaken a full analysis of the fairness of it – but I have,” Mr Walkland said.

His research stacked non-aligned farmgate prices from January 2015 against 10 global, European and UK market formulas to determine whether discretionary pricing was delivering a fair deal to producers.

Mr Walkland argued that opponents of discretionary pricing were targeting the wrong side of the market, and the industry as a whole should be looking at securing higher retail prices to increase the size of the dairy financial cake.

He said his analysis showed that since January 2015, discretionary pricing had delivered farmgate returns within plus or minus 3% of what the market indicators would suggest farmers should have got.

“Most of the time, the actual price delivered was closer to plus or minus 2%,” he said, adding that with farmers being up in some years and down in others, 2% to 3% was not an unfair tolerance.

“The [mandatory pricing] policy is wrong, divisive, and for the few, not the many,” he said. “However, it could be at the expense of the many.”

He said the whole issue of contracts was a sop to the NFU because the government would not allow an extension of the Grocery Code Adjudicator’s powers right down the supply chain.

When can we expect changes to dairy contracts?

One would be to adopt the EU Parliament’s Common Market Organisation (CMO) regulation, a proposal document from 2013, which outlines a number of recommended reforms for EU member states moving towards Common Agricultural Policy (CAP) reform in 2020.

This method would be used in the event that Theresa May’s transitional deal is passed by Parliament on Tuesday (15 January) and before the UK leaves the EU.

The most likely option in a no-deal scenario would be to use the powers in the Agriculture Bill do something different to what the CMO offers.

This would be introduced straight away, in the eventuality the UK left the EU without a transitional agreement at the end of March.

Mr Eustice told Farmers Weekly that Defra was currently in favour of using the domestic powers outlined within the Ag Bill but was currently negotiating with the devolved administrations on which option they preferred.

He said the matter had been complicated by Northern Ireland not currently having a devolved government but that the consultation could be launched in the rest of the UK while the NI assembly remained inactive.

“Clearly there is a lot else going on in politics at the moment. I think that once we have resolved the nature and timescale of our departure from the EU it will become much clearer how we should progress this commitment we have made to introducing mandatory contracts.”