Once adjusted for butterfat, production for August came in 20m litres below profile, a much smaller shortfall than in recent months.

Total output for the month reached 1146.5m butterfat-adjusted litres, bringing the cumulative shortfall to 227m litres, according to the Charles Holt/Farmers Weekly profile.

Mr Holt of the Farm Consultancy Group said the shrinking deficit was significant and put it down to better grass.

Increased concentrates in cows’ diets was another factor, he said, and seasonality could also be playing a role.

Quota values continued to fall, with 4% clean leased quota realising an average 0.65p/litre and selling for little over 5p/litre.

But some used quota has been changing hands for as little as 4p/litre.

“I think there are very few vendors of quota who will be willing to sell below 4p/litre,” said Mr Holt.

“They’d rather wait until March and see what it fetches then. I think there’s very little prospect of quota dropping further.”

Jonathan Smith of BK Quota Exchange said that the production shortfall was significant but advised farmers to consider taking some quota cover while prices were so low.

“If there’s going to be a swing, it’ll be a very quick swing and the price could double or triple. 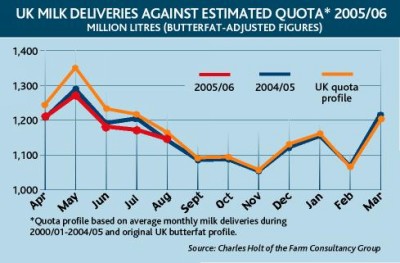