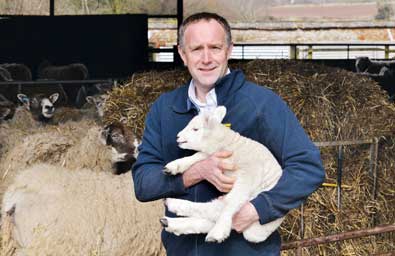 There’s no denying that it is tough going for the organic sector at the moment. Retail sales continue to struggle and many producers have already switched back to conventional production in a bid to improve margins – numbers fell 5% last year, according to the Soil Association.

However Clinton Devon Farms manager George Perrott believes the decline in organic production has dropped off quicker than the fall in sales, which is creating opportunities for those who remain, especially in the dairy sector.

The farm’s organic milk price for February supports this theory, averaging 43.4p/litre across both 250-cow herds. It was the first time for a year that Dairy Crest’s organic price had not been modulated; meaning that the entire milk volume supplied that month attracted the organic premium. In previous months varying proportions have been priced at the conventional milk price, knocking anywhere between £800 and almost £6,000 off the monthly milk cheque.

“At the moment, I’m very comfortable with the deal we’re getting from Dairy Crest,” says Mr Perrott. “It looks like they’ve secured buyers and need the milk, so it’s nice to be paid the full organic price for everything we produce.

“When we turned organic six years ago, there was a 10p/litre differential between conventional milk at 17p/litre and organic at 27p/litre. There’s still at least the same gap now and we are not having to pay for a lot of the more expensive inputs, such as fertiliser.”

Last year’s margin over concentrates was also better than the previous year, up from 27p/litre to 31p/litre.

Of course, all organic producers need a price premium to compensate for the lower yields and Mr Perrott says milk yields over the past three months have been below expectations, due to a combination of factors. February’s supply totalled 190,000 litres across 500 cows, while supply in each of January and December was about 212,000 litres.

Schmallenberg has hit the spring-calving herd particularly hard, he says, knocking milk yields by about 15% in affected animals. He thinks the disease has also exacerbated symptoms in the 35 cows that tested positive for Johne’s. “We’re making big inroads into Johne’s control across the farm, but symptoms such as scour do appear worse in animals that are also affected by Schmallenberg.”

Mr Perrott hopes further focus on the Johne’s protocol already in place will reduce the disease further. Measures include:

While organic dairy is doing well right now, Mr Perrott is less happy with the arable sector. The decline in organic producer numbers, particularly for beef and poultry, has hit demand for organic cereals, which in turn means prices have fallen.

“For the first five years of being organic we’d always worked on the basis of half the yield of conventional and double the price for cereals. We’re still getting the lower yields, but with organic oats and wheat both worth about £300/t and conventional at nearer £200/t, we’re nowhere near that price premium now.”

Most of the farm’s cereals go into the dairy rations, with the surplus – about 300t in 2012/13 – sold to neighbouring farmers or local merchants. “I generally prefer to sell direct, as it means we can set a price that’s profitable for us, yet is still economical for whoever we’re supplying,” says Mr Perrott. “It gives the buyer full traceability and confidence in the feed they’re buying because we’re three times more audited than before turning organic. It’s also easier for us to arrange smaller ad-hoc loads, although we don’t want to be chasing around all over the place, so tend to deal with two or three regular buyers each year.”

Cereals are delivered as rolled grains, and a contractor is brought in to do this rather than using the farm’s own milling equipment. “It adds another £10-15/t to the price we charge, but the kit they use is well maintained and gives a consistent quality, even with the more variable grain size that you can get in organic cereals, especially last year. We use the same guy to do our own feed, so know he is doing a good job.”

Mr Perrott plans to hold on to a proportion of cereals still in store until there is a better idea of how much forage can be produced this spring. “The wet autumn and winter means there’s 81ha of grass that hasn’t been drilled, which would’ve been used for first-cut silage in May. The cold, wet conditions also mean grass still isn’t really growing yet, so I feel we’d be daft to sell all the cereals before we know whether we’ll have enough silage.”

Lack of straw following a disappointing triticale harvest is an added challenge and Mr Perrott says three loads have had to be bought in and more may be needed, depending on the weather.

The other enterprise that has seen somewhat mixed fortunes over recent years is Clinton Devon Farms’ organic sheep flock. In total 517 lambs were finished last year at an average of £73 a head, sold through either ABM in Sherbourne, Dorset, or Dunbia.

“Some had the organic premium and some didn’t,” says Mr Perrott. “It can be quite common to get a negative premium for organic lamb at times of peak supply and I still struggle to see how organic can be worth less than conventional lamb. Just because it’s organic doesn’t mean it’s got to be sold as such.”

Mr Perrott says the farm has always tried to avoid the peaks in supply during July/August, by getting lambs away as early as possible in May. “We do as much as we can, but at the end of the day the sheep enterprise has got to fit in with everything else on the farm. It’s put into perspective when you consider that every penny move on 3m litres of milk is worth the equivalent of the entire lamb crop.

“However, the sheep are a useful source of income and are needed for tidying up grassland after cows and providing a break in grazing. It is true mixed farming and I wouldn’t want to put all my eggs in one basket by doing away with the sheep altogether.”

The farm has tried selling a few mutton and lamb direct to the public a few years ago, but sales were disappointing and it is not something Mr Perrott is looking to try again. “We’d need to devote a lot of time to it if we were going to shift the volumes required and I doubt it’d stack up once you’d costed in all the extra labour required.”

However, deer from the estate are sold direct through a farmers’ market in nearby Budleigh Salterton at the end of every month and this has proved very successful for estate ranger Tom Garner. “Tom can sell all the deer he shoots for around three-times the value he’d get from a game dealer,” says Mr Perrott. “It’s a useful source of income from what is a by-product of essential deer management.”

The one thing that is not being marketed well enough across the organic sector is the wider environmental benefits of organic farming, says Mr Perrott. He acknowledges the decision to farm organically at Clinton Devon Farms is primarily a commercial one, but says there has been a noticeable change in flora and fauna over the past six years.

“There’s definitely a greener buzz to the whole farm. But we’re not making enough of these wider benefits that organic farming is providing, whether that’s on water quality, wildlife, or plant species.

“Everyone who makes a profit out of organic should be doing their bit to promote these benefits, from the farmer, to merchants, certification bodies or supermarkets. We’ve all got a responsibility to keep the profit stream going and convince the public to keep buying organic.”