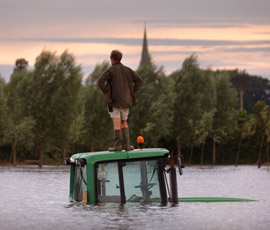 New government plans to maintain waterways are inadequately funded and leave many rural areas vulnerable to flooding, the NFU has warned.

In response to the House of Commons’ Environment Food and Rural Affairs (EFRA) committee’s report into managing flooding risk, DEFRA this week defended its record on watercourse maintenance and protecting rural areas from risk of flooding.

The department said: “We strongly disagree that DEFRA is failing to protect rural areas from the risk of flooding… more than 95% of the arable land in England is either outside areas at risk of flooding from rivers or the sea or is in areas benefiting from a greater than 1:75 standard of defence… While rural areas can be badly affected by flooding, analysis suggests that the overall exposure of the agricultural sector to flood risk is not disproportionate to other parts of the economy.”

The overall budget for flood asset management is being reduced in the current spending review period to 2014-15, in line with government policy to reduce the budget deficit.

But DEFRA said its decision to protect the frontline by providing an above inflation increase of £5m for the Environment Agency’s floods maintenance work in 2015-16 “demonstrates the priority given to flood risk management”.

Pembrokeshire farmer and NFU deputy president Meurig Raymond said the union was pleased to see DEFRA had emphasised the extra £5m funding for maintenance work, but said it had failed to mention £49m worth of cuts to the Environment Agency’s revenue budget since 2010. The agency’s flood and coastal erosion revenue budget has fallen from £275m in 2010-11 to £226m in 2014-15.

“The worrying truth is that the majority of main rivers in such areas are judged by the agency to be ‘minimum need’ where only works for legal requirements such as health and safety are being delivered on the ground.”
Meurig Raymond, NFU deputy president

Mr Raymond said: “The NFU believes this will seriously undermine its ability to maintain waterways which, crucially, will only have £20m spent on maintenance, a figure that should be substantially higher and is not enough to do the job effectively.”

However, Mr Raymond urged the department to invest in the long term, not just by building new defences, but by maintaining waterways to reduce flood risk in our changing climate.

Yet Mr Raymond warned less work was being carried out on key watercourses in rural areas as the Environment Agency sought to deliver “increasing value for money from its maintenance activities”.

He said: “The worrying truth is that the majority of main rivers in such areas are judged by the agency to be ‘minimum need’ where only works for legal requirements such as health and safety are being delivered on the ground.”