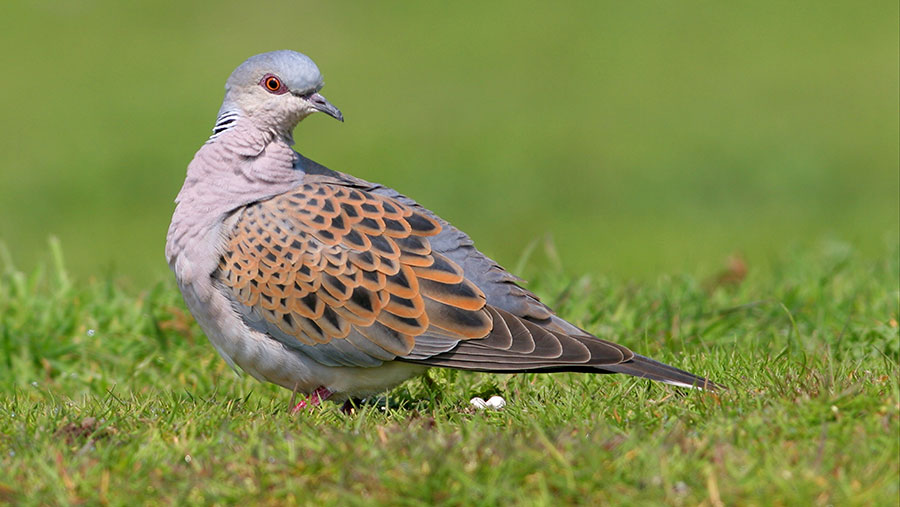 Farmers in parts of East Anglia are being encouraged to take part in a reverse auction where they bid for funding to create habitat for turtle doves.

Turtle dove numbers have declined by 98% in the UK since 1970, with East Anglia being one of their last remaining haunts.

Farmers will need to be very near to or in one of four target areas to be eligible to take part in the auction, which will be split into two bidding rounds.

Potential applicants will need to have nesting habitat suitable for turtle doves – thorny, thick, overgrown hedges or dense scrubland at least 4m wide and 3m high – either on or within 1km of their holding.

Funding is being offered to provide turtle dove feed plots in field margins or in blocks and also to create ponds or other water source for birds if none already exist.

The funding for the seed plots will cover the period from Sept 2021 to Sept 2023.

Farmers wanting to access the funding will need to decide on the number and size of feed plots they are willing to create and the price they would be willing to accept for them over the two-year period.

This figure will need to be submitted through the EnTrade website when the auction opens.

But she pointed to the need for farmers to factor in a range of issues when coming up with a price to bid.

Under Countryside Stewardship (CS) it was usually possible to site wild bird food plots on more marginal land or where it was most convenient for the farmer, she said.

But this new scheme is looking for feed plots to ideally be within 300m of the nesting site, so there will be less flexibility in terms of location.

“If you compare the price points of similar options under CS, wild bird seed mixture pays £640/ha and the cultivated areas option pays £532/ha,” she said.

Farmers putting in bids would need to be competitive with the wild bird seed option, although their bids could also reflect that it is only a two-year scheme and include the costs of returning the land back to production afterwards.

“Depending on where the plots are located, I’d want to go in for anything above £640/ha,” she said.

The reverse auction is due to open to applicants in the Hadleigh and Dedham Vale, and Upper Wensum zones on 15 February and will run until 2 March 2021.

A second round will open in June covering the North West Norfolk zone and Stonham Aspal and Gipping Valley in Suffolk.

Further details of the auction are available on the EnTrade website.