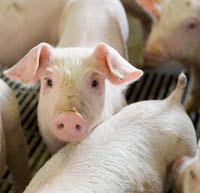 Plans for two controversial pig-fattening units in Lincolnshire are a step closer after provisionally being given the go-ahead.

Subject to a site visit, planners said permission to build two 950 units at Holme Hill Farm in South Kelsey should be approved.

Frank Tobin, who submitted the plans, was told by planners that he needed to provide more detail on how slurry from the units would be transferred.

Further information about access to and from the farm would also be needed before final permission was granted.

A spokesman for West Lindsey District council said 22 objections to the plans were submitted.

Most of those surrounded concerns over the smell and traffic generated by the pig units,” he added.

Jenny Stimson, clerk of South Kelsey Parish Council, told the BBC: “We have to look at all sides of this and look at what impact it is going to have on the village.

“We have to wait until it goes to planning to see what is going to be done with the slurry because the smell is dreadful.

“Our road system is terrible and, with the amount of traffic that’s going to be coming through, it’s going to cause the roads to be even worse.”

A final decision on the scheme will be made on 22 September.