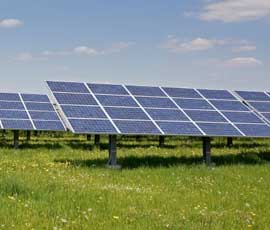 Proposals to slash the financial incentive for large-scale solar installations and increase the payment for farm-scale anaerobic digestion have been published today (18 March).

The Department of Energy and Climate Change (DECC) announced back in February that it would fast-track the review of Feed-in Tariff rates for solar installations over 50kW as it feared a massive surge in the number of field-scale “solar farms”.

As part of this review, a consultation published today proposes massive cuts to the tariffs for larger installations in a bid to calm these fears.

The consultation also proposes to increase FiT payments for smaller anaerobic digestion projects in order to encourage more uptake of this technology on farms.

DECC is seeking views on the proposed tariffs until 6 May 2011 and any changes could take effect from 1 August this year, subject to the outcome of the consultation and Parliamentary approval.

The government said it would not act retrospectively and any changes to generation tariffs would only affect new entrants to the FiT scheme. Installations already accredited for FiTs at the time would not be affected.

The news sparked a fierce response from the Renewable Energy Association, which said the coalition government was making an “horrendous strategic mistake” with its plans to slash rates for solar.

Chief executive Gaynor Hartnell said: “Larger PV projects are cheaper, and have a major role in driving down costs. We don’t want boom and bust in this sector either, but pulling the rug out from under the feet of those that have ventured into this market was precisely the wrong response.

“The UK will return to the solar slow-lane. It’s as good as a retrospective change and that does untold damage to investor confidence. It’s not acceptable and we will fight it.”

The consultation can be found on the DECC website.