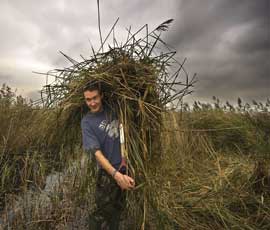 The subject of farming apprenticeships has become a hot topic on the FWispace website forums, with many users claiming that low pay in these roles is unacceptable.

Last week Farmers Weekly editor Jane King asked FWispace users “what do you say to the accusation that apprenticeships are not working well? Is a wage of £3.57 an hour exploitation?” And her questions elicited a range of responses from users up and down the country.

The majority of contributors believe that paying young people as little as £3.57 is ultimately damaging to the industry.

“Yes, the wage is exploitative. We need to professionalise the industry not dumb it down,” wrote FWispace user he-his-self.

Agriculture student Chrisvdm agreed: “I would never work for an hourly rate of £3.57. It’s way too low and yes, as an ag student I would feel demotivated by it – I could barely live off it.”

But not everyone believes that pay for farming apprentices should be pushed upwards.

“You need to invest in your own future, and accepting low pay while learning is part of that,” wrote FWispace user glasshouse. “Many who start on farms learn so much that they go on to great things.”

The value of farming apprenticeships was raised in the 25 February issue of Farmers Weekly, when Jane King tackled the subject in her opening editorial.

“Apprenticeships often get a bad press within farming and yet they encourage professionalism and offer career paths that are frequently unrivalled,” she wrote, adding that “they could offer a lifeline to many in agriculture”.

• Got an opinion on farming apprenticeships? Go to www.fwi.co.uk/apprenticedebate to have your say.