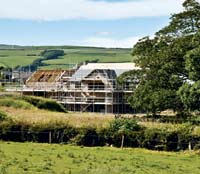 People in rural areas will have the right to build on greenbelt land without planning permission under government plans to bolster rural communities.

Planning permission is currently only granted in exceptional circumstances for affordable homes.

Unveiling the plans last week (23 July), Mr Shapps said rural residents would be able to bypass council planning consent if a large majority voted in favour in a local referendum.

However communities would not be allowed to increase a village’s size by more than 10% over 10 years.

The plans, which will be contained in a Localism Bill later in the year, also include proposals to allow locals to group together to buy land through community trusts, with support from banks.

The minister said he hoped the plans would help halt the closures of rural schools, post offices and shops because of falling populations.

“Up and down the country there are entire communities willing and eager to give the go-ahead for new developments in their area,” he said.

“The countryside must be a vibrant place to live, and cannot be allowed to become a museum.

“I want to give communities the power to preserve their villages, which are currently struggling to survive because of a shortage of affordable homes.”

Environment minister Richard Benyon said the shake-up to the planning system was “revolutionary”.

“This new plan will free up the system and empower local people,” he added.

But Ian Bell of the charity ARC-Addington Fund, which helps members of the farming community with housing issues, said the measure was inadequate.

“We’re not even scratching the surface of the problem,” he said. “It’s a disgrace that we have as many families as we do who need housing.”