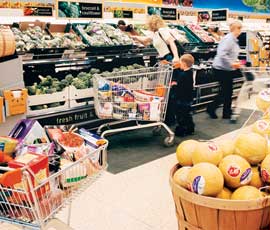 Many now believe the world is heading for food shortages. Worst affected will be the developing world, but there is growing evidence the developed west may eventually suffer, too.

We’ve also debated agricultural technologies that might help. Some of these have been adopted in other countries, but have so far been rejected in the UK and the EU – potentially one of the regions of the world where the response would be greatest.

Most of Europe’s consumers, or more accurately perhaps, Europe’s politicians, have so far refused to accept such ideas. Meanwhile, more “enlightened” people believe fears about the safety of such foods are groundless.

So, has the time come to more actively try to persuade consumers and politicians that they should urgently embrace new technologies for their own good? To point out more forcefully than ever before that support for pressure groups hostile to scientific development is a luxury the world can no longer afford? To remind them by limiting European food production for political reasons they add to our need to import and condemn others to hunger and starvation?

Our speakers will spell out the reality of the imminent food shortage. They will indicate some of the key decisions needed to improve food security. They will stress the urgency for more scientific research. They will warn of the scale of the challenge to change consumer thinking. And they will assess the implications of all this for farms.