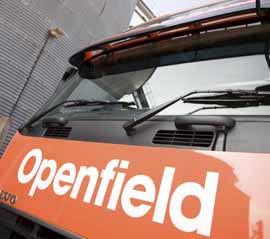 Openfield has been awarded a contract to supply feed wheat to a major feed compounder in the USA.

Details of the sale remained a closely-guarded secret, but a statement said the US company had looked to Europe to satisfy its demand after the dramatic rise in corn (maize) prices. It is thought that further shipments could be possible.

The deal adds a significant tonnage to Openfield’s export performance this season, which already includes plans to sell milling wheat to two major Spanish millers and a contract with a European biofuel producer.

Director of sales and trading, Mark Worrell, said the UK’s export programme in general was running at a good pace. He estimated about half (1.2m tonnes) of the 2.3m tonnes exportable surplus was likely to be moved by the end of the year. “We have a suitable rhythm for our surplus not to be an issue,” he said.