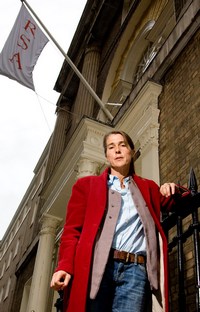 Channel 4’s warts and all farming documentary The Lie of the Land continues to prompt discussion and spark debate.

The film on Channel 4 (3 May) followed the livelihoods of two hunt workers in Cornwall and a farmer in the Cotswolds.

Its graphic depiction of farming life prompted huge debate. Some felt it was hard-hitting but it was good for the public to see how tough life is on a farm.

Others felt it was bad PR for farming and would have been better left in the can.

That debate has been further fuelled by a re-screening to an audience of 200 guests at The Royal Society for Arts in London.

The award-winning documentary maker Molly Dineen was on hand to take questions from the floor and Farmers Weekly Interactive was invited along to participate and video the proceedings.

You can view the video here:

Speaking to FWi Ms Dineen said the film was not intended to “hit people over the head”.

“The film constantly refers back to [country] sport. But in fact the main line is definitely about farming animals and food production.

“I’m a bit surprised but very delighted that it’s been taken 100% as part of the discussion about food production.”

During the post-screening debate she said: “I think that the characters in the film have had a lot of response, a lot of reaction, a lot of questions.

“I’m pleased to say the people who have spoken to me have said that it’s made them really think twice about where their food comes from.”

Depicting graphic scenes of the killing of healthy but valueless calves, Ms Dineen said she was aware “things weren’t right” in the countryside but that solutions based purely on economics would not provide the answers.

The problem with industrial parallels and economic arguments is that you’re dealing with animals – the sentiment over animals, hypocrisy over animals, disposal of animals. You could easily say: If it’s cheaper from Venezuela it should come from Venezuela. But we’re talking about animals and flesh and what we put in our bodies, and our relationship with the land.”

Read FWi’s report from the RSA.

What did you think of The Lie of The Land? You can join in the debate here.