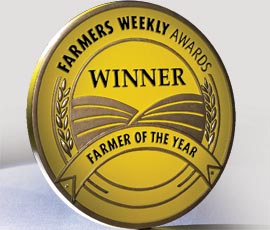 Egg producers rose to the top of the pile in this year’s competition, with all three finalists in the Poultry Farmer of the Year category keeping laying hens. Philip Clarke reports. 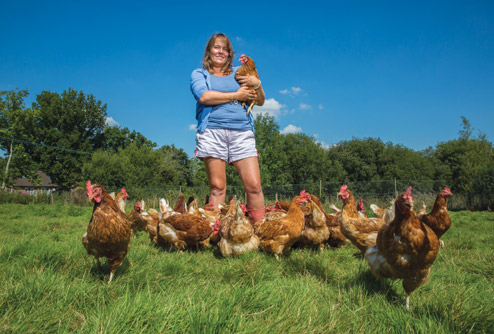 Honesty and openness are two of the watchwords that dictate how things are done at The Mac’s Farm in West Sussex, where Suzie Macmillan runs a flock of 21,000 organic layers at the foot of the South Downs.

The farm is open to the public every day to encourage farmgate sales, but there is also an extensive programme of extra-curricular events, including an annual food and music festival.

“There remains a disconnect between agriculture and the general public, and we need consumers to understand more about what we do and therefore gain our trust,” says Suzie. “That is why we open the doors to Mac’s Farm and welcome outside scrutiny.

“We never attempt to pull the wool over consumers’ eyes. I would rather answer challenging questions in a sensitive, honest way.”

The Mac’s Farm is part of the larger Grassington Rangers business, set up by Peter and Liz Barton in the mid-1980s. The business is now run as a co-operative by their three children – Richard, Andrew and Suzie – who each have their own separate farms.

The flock on the Mac’s Farm is split between Lohmann and Hy-Line breeds, run as four flocks in two new and two older sheds.

“We use a bespoke diet to help control egg size,” says Suzie. “We want our birds to lay an egg that is right for their bodyweight. All changes are made gradually, increasing bodyweight slowly and bringing them into lay carefully, ensuring birds are calm and stress free.”

As a result, the birds show good feathering and longevity, laying to 78 weeks and averaging 320-330 eggs a hen. Range enrichment is designed to encourage the birds out, while organic farming means they cannot be treated with antibiotics. “If disease does strike, we see a drop in productivity for a few weeks, but our birds recover and are all the stronger for it.”

Most of the eggs are sold to Noble Foods for distribution through Tesco and The Co-op. Another local packer also takes eggs to box up as The Mac’s Farm Free Range Organic Eggs, which are sold locally, earning an extra margin.

Suzie says she is totally committed to organic, even though the sector has experienced some tough times in recent years. “It fits well with who we are and how we like to do things.”

A self-confessed animal lover, Suzie says she still suffers emotionally the day “my girls” are taken away at depletion. As such, she runs a comprehensive re-homing scheme in partnership with Brighton Animal Action and other welfare organisations. Some 50,000 birds have gone to new homes from the farm in the past four years – about 50%.

On the subject of welfare, Suzie is adamant that beak trimming of day-old chicks is the only practical solution currently available to outdoor egg producers to prevent injurious pecking. “If a ban comes in it will be catastrophic,” she says. “We will have dead birds, farmers will close the doors again and it will become the industry’s dirty little secret.”

But, as well as being committed to high welfare, she also sees the operation as a business, having invested some £600,000 over the past three years in new infrastructure. The family keeps detailed costings and holds regular meetings. “We have focused intently on controlling input costs and continue to adapt.

“I am convinced that, as the economy picks up and animal welfare becomes a growing influence on consumer choice, organic eggs will be sold in greater numbers. People want a real egg, produced by real people and the Mac’s Farm brand can deliver on that. That’s my mission.” 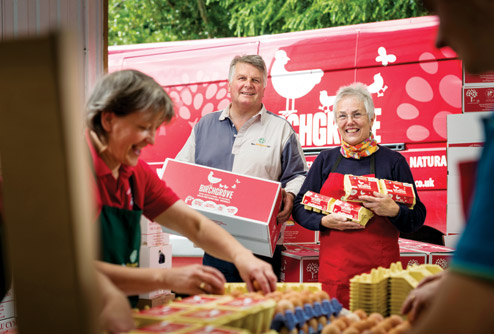 Having previously won Poultry Farmer of the Year with his wife Gwen in 2006, Tony says the Birchgrove Eggs business has evolved and grown since then, in no small part due to his determination to farm more sustainably.

The first step down this path was to get Bangor University to calculate the business’s carbon footprint – something it did in 2010. “It was a really rigorous process, covering everything from our packaging to a survey of our land,” Tony recalls.

“A policy was immediately implemented to freeze our carbon footprint, and then devise a strategy to reduce it, while not impacting on growth.”

Symbiotic farming practices were introduced, including the planting of 400 native trees on the 12ha holding. “Apart from acting as a carbon sink and shelter for the hens, they will in time produce fruit, nuts and timber, increasing the food and resources produced per acre.”

Another strategy has been to improve logistical efficiency. Two of the wholesalers that take Birchgrove eggs now “backhaul” on their journeys, reducing delivery costs and fuel consumption. The business also has a rigorous recycling policy – even egg shells go for green waste.

But perhaps the greatest carbon gain is yet to come, as Birchgrove is closely involved in a feed project with Aberystwyth University, trialling lupins as an alternative to imported soya.

“We are entering the third year of research and the initial results look extremely favourable,” says Tony, who is industry lead on the project. “This research could revolutionise future diets, while reducing supply chains and strengthening food security.”

This green farming ethos has also given Birchgrove a powerful string to its marketing bow, which it has exploited to the full.

“Price is not the most important aspect in consumers’ decision making, but total product perception is,” says Tony. “This encapsulates product quality, production methods, consistency, workforce, trust and here, in parts of Wales, bilingual packaging.”

Always willing to take outside advice, Tony employed the services of a marketing company in 2011 to take his business “to the next level”. This involved new packaging – the flat-edged boxes ensure the Birchgrove name is prominent on the shop shelf – and a marketing strategy based around a revamped website, newsletters and competitions. “Win a weekend in a tepee” was particularly popular.

Last year approximately 5% of turnover went on marketing, while sales increased 20% to £800,000, helped to some extent by the development of a new branded Birchgrove Mayonnaise.

This development is testament to the passion and energy that Tony commits to the egg sector. He has held a number of leadership roles, including a four-year stint as NFU Cymru poultry board chairman.

But the actual farming side of the business has not grown, with just 3,000 layers in one shed on his own farm.

Instead, Tony has increased the number of contract producers, with five families now supplying the small packhouse at Trawsgoed, near Aberystwyth, with eggs for which they receive a 5p/doz premium over the average free-range price.

No flock has more than 6,000 birds – Tony believes larger units create the wrong impression – and all are reared to the same high standards as his own flock.

This means the birds are introduced to the range at 18 weeks – five weeks ahead of guideline – to encourage good habits. They are brought into lay slowly and retained through to 80 weeks of age.

The birds are a mix of Bovans Browns and white Amberlinks – the latter included for their excellent ranging and laying. “As far as we are aware, we are the first producers in the UK to mix breeds of commercial egg layers, to improve overall performance and for aesthetic value.”

The move is typical of Tony’s innovative approach, with one eye on sustainable farming and the other on the market. 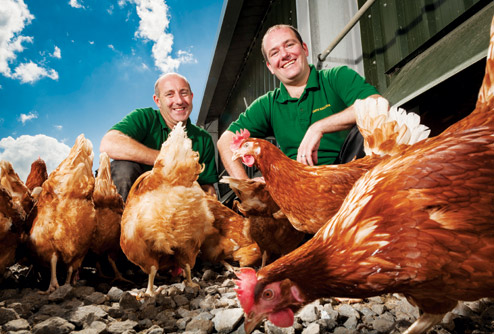 Egg producer packers Stephen and Richard Tulip were about to enjoy a period of consolidation for their Lintz Hall Farm business, having expanded steadily for more than a decade. But then they saw an opportunity.

That was in the summer of 2012, when Sunny Hill Eggs in Northumberland approached the Tulips, offering to sell the business.

“Although this was unexpected, we seized the opportunity, taking on Sunny Hill as a contracted producer and merging its customer base with our own,” says younger brother Richard, who looks after sales and marketing.

No sooner was the ink dry on this contract than another contracted producer approached the family, offering to sell his entire farm, including 40ha of grassland and a 12,000 bird free-range flock.

“This farm is less than a mile from Lintz Hall and provided the perfect site for further free-range expansion. The transaction was completed just before Christmas,” says Richard.

Both these deals demonstrate the brothers’ commitment to the egg sector and typify their approach to business – if it makes sense, go for it.

This ethos has held sway for three generations, since their grandfather started the business on a three-acre plot outside Newcastle upon Tyne in 1951. But things really took off when Stephen and Richard came on board, embarking on a 10-year expansion plan in the early 2000s.

Lintz Hall diversified into free range and became Lion code and Freedom Food accredited. “We could see free range was where the supermarkets were going, and we needed to go there too. But more than 50% of sales were still in cage eggs, so we also decided to invest in colony.”

Richard says the family philosophy has always been to do the whole job from start to finish, and work closely with everyone involved. In total, Lintz Hall has invested £7m since the first free-range flock went down in 2004, culminating in the completion of a new 132,000-bird colony unit and packing station in 2011.

As well as diversified production, the Tulips ensure they have a varied customer base, supplying a range of independents, wholesale and food service outlets. They are also sole suppliers of locally produced free-range eggs to Asda and Tesco in the North East, with their Derwent Valley brand. This followed direct approaches by the brothers to get their product shelf space.

Liveried vans, staff uniforms, point of sale material and “the personal touch” – ensuring the same driver delivers to the same customer every week – are all part of the marketing strategy, Richard explains. The company also employs a PR agency to raise its profile, and has lined up a series of local radio ads.

Production at Lintz Hall is overseen by older brother Stephen. “Continued monitoring is key,” he says. “Everything we do is tailored for the stock, not for ease of management. We blood test at the end of each flock to monitor what the birds have encountered. This allows us to adjust our vaccination programme before the next flock arrives.”

All sheds have load cells to monitor daily feed consumption, and diets are tailored for each stage of the bird’s life. “We look for an average egg size of 65g. There is no need for the egg to be any bigger as there is no price premium and you are sacrificing shell quality.”

Stephen has also developed an automatic water flushing system, which runs at night to ensure there is fresh water for the birds first thing in the morning.

Emphasis is also put on staff training to ensure they adhere to strict biosecurity protocols and spot any performance changes.

The brothers are also aware of their social responsibilities, hosting a number of farm visits, sponsoring the local rugby club and supporting Hen Power, a charity that provides birds and pens to a housing scheme in Gateshead.

And what of the future? “Well, we’d like to consolidate for a couple of years. But who knows what opportunities are out there. It’s in our nature to grow and develop,” they say.

“The poultry sector is full of talented individuals who combine production excellence and business acumen to keep the nation’s shelves stacked with quality eggs and poultrymeat. The three finalists demonstrate these attributes in bucketfuls.”