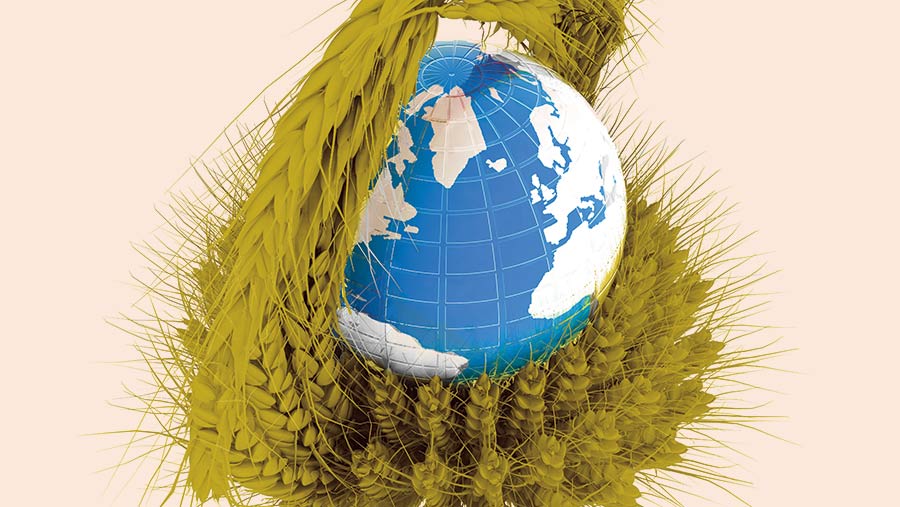 The Farmers Weekly theatre at this year’s Cereals event in Lincolnshire showcased three farmers and an agronomist from around the world who are pushing the boundaries of crop production.

Advice on no-till from Canadian early-adopter 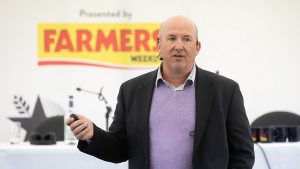 Find a mentor
Where farmers are looking to move from a tillage-based system to direct drilling and cover crops, finding a mentor that has successfully transitioned in similar conditions will help build confidence, according to Canadian no-till expert Blake Vince.

Choose suitable cover crop mixtures
Mr Vince doesn’t buy premixed cover crop seeds, instead blending his own on farm. Growers should find species that are not part of the typical crop rotation, avoiding brassicas if growing crops lsuch as oilseed rape, for example.

He also likes to include flowering species such as sunflower, phacelia, and flax in the mix to support pollinators.

Also, establish what the main goals of growing a cover crop are. Eliminating compaction? Fixing nitrogen? Grazing for animals?

These are all factors that will dictate the makeup of the cover crop species mix.

Pick the right drill
There are four objectives for Mr Blake when buying a no-till drill:

Aim for profit, not yield
While the agricultural industry tends to focus on increasing yield, Mr Blake urges growers to focus on profit to ensure their own business is sustainable.

His no-till establishment system and cover crops can help do so, as it has eliminated the need for expensive tillage, reduced nitrogen inputs, cut soil erosion, improved soil biology and soil carbon and increased water infiltration and water-holding capacity.

Mr Vince has also bucked the trend in North America, as he grows non-GMO varieties of maize and soya bean to fetch a higher premium for his grains, increasing margins. He also notes the importance of sound, independent advice. 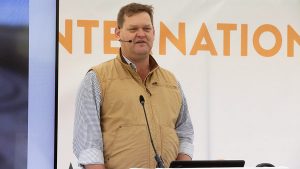 Specialism Practical application of robotics and automation in agriculture and horticulture

The smaller and lighter machines Mr Bate is delivering to farms help to improve timeliness, reduce soil compaction and minimise herbicide inputs in an arable setting.

Attaching a mower to the robots is improving margins for turf producers, with a move from three-day mowing cycles to 24-hour mowing improving grass quality and getting the turf ready for market faster.

This is reducing production costs and increasing premiums for growers.

In horticulture, combining Swarmfarm robots with visual processing technology will see machines able to count and prune apple tree flowers to ensure the right number for optimum yield and quality.

This will provide massive labour saving and is said to increase apple yields by more than 40% compared with manual pruning.

More targeted spraying can help combat resistant weeds
Australia has one of the biggest herbicide-resistant weed problems in the world and Swarmfarm Robotics is playing a role in combating the problem.

With WEEDit spot spraying technology on board his sprayers, glyphosate use in fallow spraying is cut by up to 99%, reducing selection pressure.

It allows the delivery of more lethal doses to minimise or even eliminate survivors.

Recent developments include a retractable tine, which can drop down when a weed is detected and hoe it out.

This could have potential in organic systems or in crops to weed between rows.

The company is also looking at microwave technology that can zap resistant weeds.

This approach has not been accepted due to slow speed of operation and potential risk to operators, but robot technology now makes it viable.

Robotics could help save key pesticides
Drift of phenoxy herbicide 2,4-D is a serious environmental concern in Australia and has led to restrictions on how, when and in what conditions the active ingredient can be applied.

Mr Bate is working alongside agrochemical manufacturer Adama on a project that sees a weather station integrated into a Swarmfarm Robotics sprayer.

This allows the machine to record conditions and exact GPS location of each weed when spot sprayed with 2,4-D, enabling the farmer to guarantee 100% compliance with the rules.

It is hoped that going back to regulators with such data will demonstrate that certain products can be applied in a targeted and safe way, potentially leading to “robot application only” labels and products saved from further regulation or withdrawal.

Could this be a way of stemming the flow of lost active ingredients in Europe? 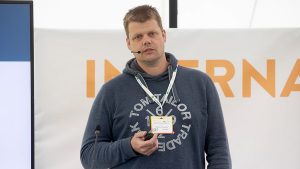 Understand what the definition of precision farming is
Buying a steering system or section control on the sprayer is not “going precision farming” as Dutch potato producer Jacob Van den Borne defines it – they are solely tools to reduce overlap.

Collecting data on variables such as weather, soil, crop growth and yield has enabled his vision of precision farming to come to fruition and he uses weather stations and a range of sensors to do so.

All data collected by tractor sensors or sensors mounted on farm machinery is also contextualised by operators through a cloud-based software system when leaving the field to help make sense of results.

He has used a multi-depth electroconductivity (EC) scanner to map his soils and divide them into zones.

These zones are then investigated and combined with other data, such as historic yield maps, to create yield potential maps.

These can range between 50t-100t/ha of potatoes in the most productive spots.

Likening the soil to a battery, knowing how much “charge” it has through these maps allows him to optimise inputs and maximise yield.

Charge the soil’s battery with targeted inputs
Once the potential of the zones is known, technology can then be used to vary inputs based on that potential.

The other is what he calls the “Olympic strategy”, where the “best athletes”, or high-performing soils, get more investment to win the competition.

For his potatoes, he has found that the Robin Hood strategy only works well for seed-bed applications at planting for boosting early growth, with the Olympic strategy more effective when top-dressing N later in the season to maximise yield. 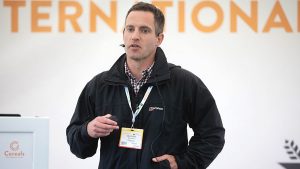 At 1,800-3,000m above sea level, temperatures are moderate and yearly rainfall and the length of the season are surprisingly similar to southern England. Mr Jones outlines the learnings he would apply in the UK, if he returned home.

1. Seed on wide rows and use inter-row harrows
Ryegrass is a problem weed and the best control Mr Jones has achieved since being in Kenya has been in barley crops drilled on 15in rows with starter fertiliser.

This has got the crop up and above the ryegrass quickly, then allowed an RTK-guided sweep tine to be used inter-row to take out weeds. Could this help in problem grassweed situations in the UK?

2. Relay crop pulses or cover crop in the inter-row
It is possible to establish a pulse crop and establish a cereal crop before harvest. This is repeated but the inter-row shifted each year, allowing the following cereal to take advantage of residual nitrogen fixed by the pulse crop.

It also reduces the build-up and impact of soil-borne diseases, such as take all and rhizoctonia in cereals, too.

3. Aggressive use of variable rate technology
In oilseed rape and wheat, the best yields Mr Jones has achieved are where variable seed and fertiliser rates have been used to manage the crop canopy.

Mr Jones says the technology is not about making seed and fertiliser savings, but pushing the crop based on yield potential of the soil.

4. Leaf tissue test more
The lack of tissue testing crop plants for nutrients in his six years as a UK agronomist is an embarrassment for Mr Jones.

He has been using it routinely in Kenya – up to four times per cropping cycle – and it has enabled him to target macro- and micro-nutrients exactly when and where they are needed, saving unnecessary cost in the process.

Where growers are unsure of micronutrient deficiency parameters – which may be set by advisers with a commercial interest – run strip trials to work out optimum application rates.

In Kenyan Canola – or spring oilseed rape – he has found that the lower the seed rate, the higher the yield.

Planting as little seed as 1.2kg/ha requires a precision establishment approach, using accurate drills on wide 15in rows to reduce seedling competition between, and in, the rows.

Kenyan growers are also using a moisture-seeking tine developed in Australia, which sweeps dry soil aside and places seed in a moist trench for rapid germination. The trench collects rain and is the last place to dry out, helping to combat drought.

The whole approach has achieved yields in excess of 5t/ha.

6. Pay more attention to the subsoil
Often, soil pits are dug far too shallow to solely focus on the top soils. However, in a dry season – much like the UK had experienced up until June – looking to the subsoil to see what might be impeding crop root access to subsoil moisture.

This will help decide what remedial action might be required, such as a deep rooting cover crop.

Who are the International Farming Superstars?

Our International Superstars are three growers and an agronomist from around the world who are leading the way in adopting new technology and practices to drive crop performance.

These pioneers spoke in the Farmers Weekly Theatre at the Cereals event.