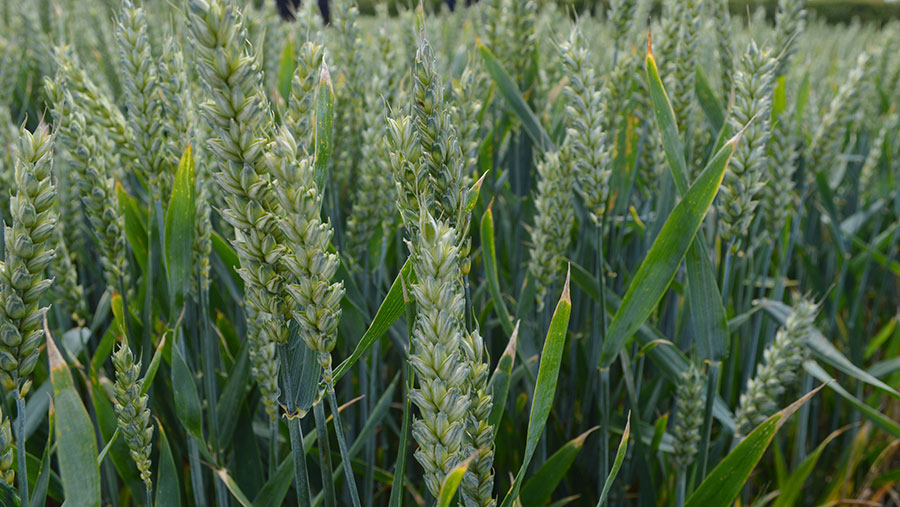 A novel cereal fungicide, which is set to be launched in the UK next spring, is being sprayed on Irish wheat crops for septoria control this season after trials showed it boosted yields by 0.5t/ha.

The fungicide Inatreq from Corteva Agriscience received approval from Irish regulators at the end of March, and 12 growers from across Ireland are using it as their flag-leaf T2 spray.

The product has a different target site to other commonly used systemic wheat fungicides, such as SDHIs and azoles, and so could be a step forward in managing fungicide resistance in diseases.

Liz Glynn, the company’s national field technical manager for Ireland, says 10ha packs were supplied to growers to test the product out in fields, from Cork in the south to north of Dublin.

“From our 2019 trials, Inatreq showed a yield advantage of 0.35-0.5t/ha over standard SDHI-azole products,” she told Farmers Weekly as the Cereals LIVE 2020 event was taking place.

The company received Irish approval for the straight product Inatreq – chemical name fenpicoxamid – under the brand name Questar. It is being marketed as a co-pack alongside the often-used azole metconazole to mix the two on-farm.

The agrochemical giant is still awaiting registration of Inatreq in a co-formulation with the widely used azole prothioconazole for Ireland, and also for the UK for the 2021 spring season.

Although parts of Ireland have been seeing a dry spring like most of the UK, southern areas around Cork have seen more rain and therefore wheat crops are under moderate septoria pressure.

Many wheat crops on the 12 farms were sprayed with a T2 fungicide mix more than three weeks ago and most included the multisite chlorothalonil before it was banned on 20 May.

Ireland, due to its wet climate, is seen as having some of the highest septoria pressure in its wheat-growing area in Europe, but the climate does lead to the country having the highest average wheat yields in the world.

Existing fungicides are not giving the same level of control of septoria as they did in the past, so Ms Glynn said it is encouraging to have new chemistry coming through to help farmers, and the inclusion of another multisite, such as folpet, may be needed to limit resistance building up.

“In our trials, we start to see a difference some three to four weeks after T2s, when the control of septoria from competitive products starts to taper off compared with Inatreq,” she adds.

The new fungicide shows no cross-resistance to existing cereal fungicide chemistry, but is likely to be classified as having a medium to high resistance risk to septoria and will require a clear risk-management strategy.

This is why it is will used in mixes, similar to SDHIs, to limit or delay any fungicide resistance building up in septoria populations.

The fungicide comes from a new class of cereal fungicides – the picolinamides – and its action is described as a quinone inside inhibitor, as it inhibits mitochondrial respiration within the septoria fungus, causing it to die.