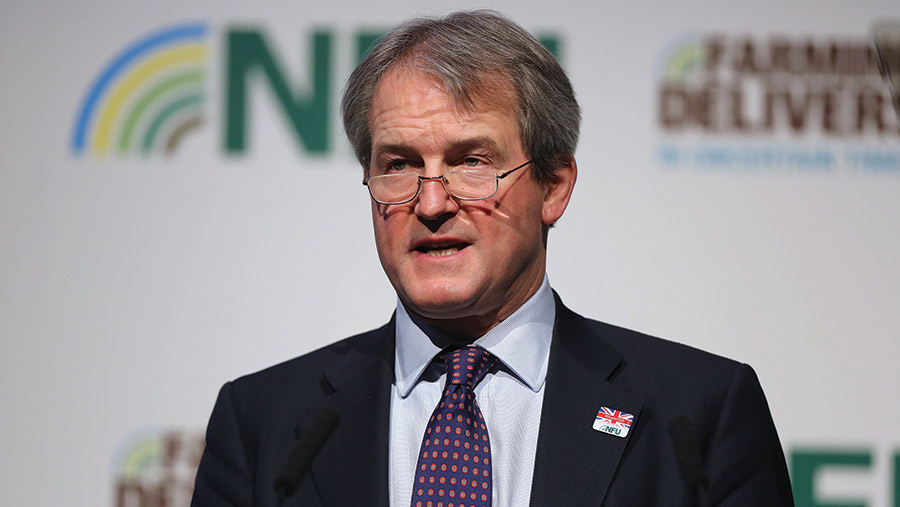 British farmers would be better off if the UK left the European Union, former Defra secretary Owen Paterson will tell industry leaders.

With a promised referendum on the UK’s EU membership due before the end of next year, Mr Paterson will go head-to-head in an in-out debate with European farm commissioner Phil Hogan at the Oxford Farming Conference on Thursday, 7 January.

“I believe that the UK has a great future beyond the political arrangements of the European Union,” Mr Paterson is expected to tell conference delegates. “This particularly applies to our agriculture and our environment.”

The former cabinet minister, who served as Defra secretary from 2012-14, believes a UK government outside the EU could better support agriculture – and even allocate more generous farm payments – in a “much more effective and targeted manner”.

Agriculture is being hampered by EU membership, believes Mr Paterson.

Outside the EU, the UK would be able to develop its own bilateral trade agreements, increase farm output and work with like-minded countries to combat plant disease and animal disease.

His comments come amid warnings by two prominent agricultural economists that leaving the EU would pose huge risks.

Former NFU chief economist Sean Rickard and Reading University’s Alan Swinbank have both warned that leaving the EU could mean years of uncertainty for farmers.

It was doubtful that the UK would regain control over agricultural policy in the event of an EU exit, said Mr Rickard.

The UK would still have to follow many regulations cited by campaigners as reasons to leave the EU – and renegotiating any trade agreements could take years.

Prof Swinbank has expressed similar concerns. “I don’t see or feel there is any clarity [from the government] about what an exit means,” he said, describing ongoing uncertainty over the implications as “politically worrying”.

Last month, NFU Scotland went further, becoming the first major farm union to say that the UK should stay in the EU.

The overall benefits of EU membership outweighed any advantages farm businesses would gain from an exit, it said.

But other farm organisations are less forthcoming. The NFU and the Country Land & Business Association (CLA) have so far refused to take an in or out stance – despite acknowledging that the referendum result will have big implications for agriculture.

NFU president Meurig Raymond said: “The NFU is committed to providing more information on the financial impact of being in or out in of Europe. It’s vital we know the facts before casting the vote that could completely change the way our industry works.”

CLA president Ross Murray said: “The CLA’s priority is to ensure that farming and rural businesses can operate in a fiscal and regulatory framework that provides confidence and certainty, and allows investment and growth.

“This has to be the case whatever the outcome of a referendum.”