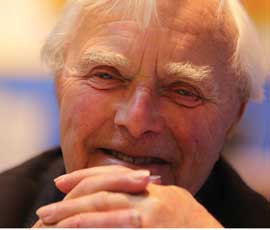 His may not be a familiar face, but many readers will have unknowingly heard this octogenarian’s voice booming over a loudspeaker at some point in the last 40 years.

Bryan Shepperton, known fondly as “Shep”, retired this year after 38 years as the announcer at the Dairy Event, which became Livestock 2012 this year and took place recently at the NEC, Birmingham.

With no family connection to agriculture and no experience of public addressing, Shep came about the job by an unusual route.

“I had no farming background but always wanted to be a farmer. Of course I had no money to set up my own farm, but got a job as an assistant farm manager.”

This led to a role at now defunct Imperial Chemical Industries, with a job as a large livestock advisor for Quaker Oats and a spell in the army in between.

“One of the costed farmers for ICI asked if I’d like to do a job one week a year. It turned out to be an assistant car park steward at the Dairy Event, much to the amusement of my colleagues.”

The biggest change he has seen in his four-decade-long announcing career is the kit farmers use.

“Farmers are much more technical and computer-orientated now. There is so much more equipment.

“Back when I started, it was a small event and has just grown so much. It has been constantly evolving and has changed its name several times.”

This year the Dairy Event became Livestock 2012, to reflect its broader reach and growing popularity. While dairy cows have always been the most common sight, this is not the first year it has hosted other animals. “In the past we’ve had water buffalo, alpacas and even a camel.”

But with the range of animals on show came difficulties. “The biggest challenge has been biosecurity. We’ve managed, but there have been some tough times. One year the event couldn’t be held because of foot-and-mouth.”

During the course of his career, including representing the Dairy Event, he made three trips to Buckingham Palace, visited Trinidad and Kenya and made numerous visits to Brussels.

After visiting such far-flung destinations you would expect the 80-year-old to want to settle down. However, with no children and a love of travel, Shep sees retirement as a good opportunity to visit new places. He’s already booked a holiday to Costa Rica and Honduras next March.

Is there any chance he’ll do another year? “I said I’d retire at 80 and I’m sticking to it – otherwise my wife will kill me!”

News, pictures and video from Livestock 2012 incorporating the Dairy Event.