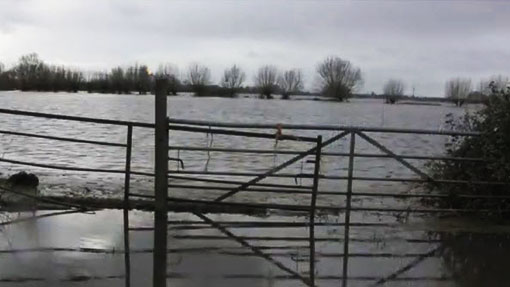 Emergency flood defences will be tested to the limit this weekend on this part of the Somerset Levels, where thousands of hectares of farmland remain under water.

Despite weeks of rain, locals say a lack of dredging has caused the rivers Parrett and Tone to burst their banks.

Environment Agency workers continue to operate more than 60 pumps around the clock to drain an estimated 1.5m tonnes of water from 65km² of the Somerset Levels – the biggest pumping operation ever undertaken in the county.

Sandbags are being used to shore up the banks of the River Parrett so it can carry more water. Meanwhile, farmers are bracing themselves for more rain, forecasts of winds and a high tide expected to measure 12.1m at Burnham on Sea this Sunday (2 February).

James Winslade, who farms at Moorland, Bridgwater, said about 94% of his farmland – 320ha out of 340ha –, was under water. His elderly parents had been forced to move out of their house. And the family’s herd of 550 beef cattle was “bunched up” in sheds.

“We lost more than ￡160,000 last year due to the floods – and now it looks like it will be more than ￡240,000. The rivers need to be dredged but the Environment Agency hasn’t done it for more than 20 years since they took over responsibility from the National Rivers Authority.”

An e-Petition calling on the government to stop the flooding by dredging had gathered 5,216 signatures when it closed on Wednesday (29 January). An action plan to deal with the situation will be drawn up within six weeks, DEFRA secretary Owen Paterson announced this week.

Mr Paterson saw the flooding for himself during a visit to Somerset on Monday. But locals said the ministerial visit and listening ear were too little too late – describing Mr Paterson as uncommunicative and criticising him for arriving without wellington boots.

More on this: Paterson pledges to tackle flood misery

“These floods have not been the result of bad weather,” said a spokesman for the Stop the Floods pressure group. “They are the result of bad policy. If Owen Paterson thinks the taxpayers of Somerset are going to settle for being treated like third class citizens then he will be disappointed.”

Beef and sheep producer John Hebditch, who farms at North Curry, agreed more could be done. “We accept the fact that the weather has been very inclement – to put it mildly – for the past two or three years,” he said. “But the river hasn’t had done any work on it.”

Dredging the rivers and maintaining them properly would enable them to carry more water, said Mr Hebditch. “It is surprising how much water would not go out on to the moors – and how much more water could be pumped back in.”

More on this: Video: Farmers blame government for flood crisis

The Environment Agency insists increased dredging would not have prevented the floods because of the sheer volume of rainfall. On tidal stretches of rivers, silt started to return immediately after dredging. And where dredging increased river flows, it could also worsen flooding downstream.

Kate Marks, the agency’s flood risk manager, said: “The country has faced an extraordinary combination of weather conditions over the last six weeks and our thoughts are with those communities that have and are experiencing flooding. We are doing everything we can.”