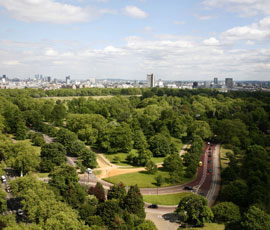 A festival of farming will still take place in London, say organisers – even though Hyde Park has withdrawn as the chosen venue for the event.

Organisers of the Farming in the Park initiative were told last week that the planned showcase of British farming excellence “cannot take place” in Hyde Park in 2014 or in the near future.

“In late summer last year, we had an agreement from Royal Parks, evidenced in writing, that we could use Hyde Park in late September 2013 for our proposed event.

“In spring, without warning, they changed their minds and when we asked if there was a chance of a slot in any month in 2014, they deliberated it for six months and then said no.

“We’re immensely disappointed, and this decision by Royal Parks will have dented the aspirations of the many individuals and organisations who had pledged their support for the event.

“But we’re keen to galvanise the overwhelming support we’ve had, and are determined to find another venue to showcase the very best of British agriculture to an urban audience.”

Talks are already under way with authorities that oversee a number of alternative London venues, including Clapham Common and the Olympic Park.

Mr Smith said Farming in the Park was also in discussion with another organisation over plans to host an indoor food and countryside event next August.

“We very much support the idea, although we are still resolved to hold an outdoor festival sometime in 2014,” he said.

Hundreds of farming and food organisations, as well as government ministers, have pledged their support for the urban agricultural show that aims to educate as well as entertain.

The Duke of Edinburgh, who was patron of two similar events in 1989 and 1992, also lent his support, hosting a reception to promote the plans at St James’ Palace last December.

But in spring 2012, Royal Parks were granted a license to host more lucrative music events in Hyde Park, so undertook a review of events scheduled for the central London venue.

“One of the most disheartening aspects of this is that Westminster City Council strongly support our event and had been very helpful during our initial discussions arranging logistics,” said Mr Smith.

“Ironically, Westminster residents were strongly opposed to more live music in Hyde Park, but that appears to have fallen on deaf ears.”

A recent occasion where Hyde Park had to pull the plug on a Bruce Springsteen rock concert at 11pm showed that a farming festival would be more in keeping with the park environment.

“It’s deeply regrettable that Royal Parks should now feel unable to host a landmark event for British farming, contrary to their previous indications that it fits with their objectives,” said Mr Smith.

“But we have already received assurances from many in the industry that an alternative venue in London will deliver an event of equal impact and appeal.

“We’d like to thank those who have been in touch to reaffirm their support and offer help. We’re now working towards securing a venue and a date in 2014.”

More information on the festival can be found online.