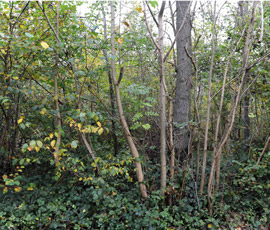 Mr Paterson’s comments came as he prepared to host a summit to discuss the spread of the disease, which has now been confirmed in forests and woodland in Kent and Essex after an urgent survey to seek out traces of the disease in Britain’s established woodlands.

Some experts fear ash dieback could devastate the UK’s 80m ash trees – posing the biggest threat to the British landscape since Dutch elm disease wiped out most of the country’s elm trees during the 1970s.

Ash dieback has now been confirmed in trees in 14 nurseries, 36 planting sites and 32 locations in the wider environment, including forests and woodlands. The first case in woodland was detected last month in Suffolk.

Results from an urgent survey to uncover the extent of the disease are expected in time for the summit on Wednesday (7 November). It will bring together scientists, charities, landowners and the horticultural industry to discuss the next steps to combat ash dieback.

Mr Paterson said the government was doing everything it could to identify cases of the disease so it could focus efforts on those areas. He added: “I would expect even more cases to be confirmed as our urgent survey of ash trees continues.”

DEFRA said confirmation of ash dieback in Kent and Essex did not mean the disease has spread. It is believed the disease may have been present in East Anglia for a number of years, and is likely to have been transmitted by wind from the mainland Europe.

Speaking to MPs earlier, Mr Paterson said resources would be switched within DEFRA to tackle ash dieback. This would involve curtailing some other activities or placing them on the back burner, he suggested. Mr Paterson said: “We face a very difficult time.”

As money was limited, it would be better spent on controlling the disease rather than compensation. In the longer term, tackling ash dieback and similar tree diseases would require a “serious strategic shift” within DEFRA, said Mr Paterson.

Caused by the fungus Chalara fraxinea, ash dieback causes blackened, dead leaves, lens-shaped lesions on stems and branches and trees with withered tops and shoots. Affected trees are removed and destroyed by burning or deep burial on site.

A free smartphone app – at www.ashtag.org – enables anyone to photograph a diseased ash leaf, geo-tag its exact location and send the picture to plant pathologists, who will identify whether the tree is infected.