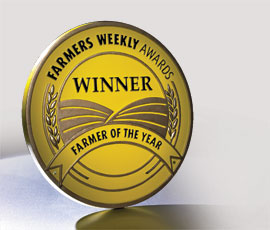 We can now unveil the shortlist for the Farmers Weekly Awards 2012.

The 45 businesses across 15 categories now go head-to-head for the top spots in the farming industry’s most coveted awards.

Entries came from across the length and breath of the country – from businesses big and small, new and established.

Competition was fierce and it was tough whittling it down to just three finalists in each category – but, after detailed deliberation by our panel of expert judges, we can now reveal the shortlist.

1. Tony Bambridge, Norfolk
Tony manages 1,250ha of cropping and together with his team is achieving exceptional yields including more than 100t/ha for sugar beet and 13t/ha for wheat.

2. William Gribbon, Norfolk
William produces 25,000t of potatoes a year and last year he successfully launched his own branded new potato – Norfolk Peer – to create more value out of the crop.

3. Guy Poskitt, Yorkshire
Farming 2,630ha, Guy has driven his business forward by adopting innovations such as controlling potato cyst nematode with biofumigants and carrying out on-farm trials with a vision-guided sprayer

4. James Evans, Shropshire
To improve efficiencies, James has completely overhauled his suckler herd of 250 cows by introducing the Stabiliser breed, focusing on breeding strategy and sustainability.

5. Robert Parker, Dumfries and Galloway
The “Black Baldie” – an Aberdeen Angus x Hereford – is at the heart of Robert Parker’s simple 180-cow system where he focuses on high health and spreading the word on profitable production as a Scottish Monitor Farm.

6. Neil Rowe, Oxfordshire
Neil places a firm focus on environmental efficiency while managing a simple, low-labour system where the herd of 150 cows are rotationally grazed to fit with his aim of “feeding what you can grow”.

9. Jack and Bay Watson, Warwickshire
At 17 years old Jack and his brother Bay took over the family grassland contracting firm and over the past seven years have invested in new equipment and expanded into new markets.

Countryside Farmer of the Year

10. Rob Allan, Oxfordshire
“Food for us and food for wildlife” is the motto Rob uses when hosting visitors to 520ha arable estate. Delivering this environmental balance is also delivering greater profits.

11. Andrew Brown, Rutland
A community woodland, HLS, 80 bird boxes and a doubling in the number of bird species are all part of Andrew’s commitment to sustainable farming on this 252ha mixed business.

12. Andrew Hughes, Hampshire
Photography triggered Andrew’s interest in creating more biodiversity on this 720ha arable and beef estate as his camera and attention was drawn to the wildlife habitats.

13. Neil and Michael Christensen, Somerset
Regular assessment of protocols and a drive for sustainability has helped Steanbow Farms bounce back from running at a loss five years ago. The family’s 500-cow dairy unit sits alongside broiler chickens on the 600ha farm, which also hosts budding music fans at the Glastonbury Festival.

15. Thomas Steele, County Down
An eye for detail and a focus on business planning for improved efficiency has helped Thomas Steele build a successful dairy model for his 400 cows. The 263ha farm also plays host to research trials into areas such as dry cow therapy and farm nutrient management.

16. Ian Burrows, North Yorkshire
Ian has secured a future for the family’s 260 acre arable farm by developing an innovative product and business supplying Timothy grass hay to the pet market.

17. Callum and Jill Clark, Inverness
Callum and wife, Jill, have overcome the challenges of farming in a remote location by making award-winning artisan cheese that adds value to the milk from a 150-cow organic dairy herd.

18. Andrew Francis, Suffolk
Farm manager Andrew has helped build a sought-after food and farming brand around the 22,500 acre Elveden Estate, benefiting other producers as well as the home farm.

19. Derek Gardner, Somerset
With almost 40 years’ experience in the dairy sector with Promar, Derek has been a leader in his field providing a wide range of consulting services including farm business management, strategy, and benchmarking to both farmer and non-farmer clients.

20. Gordon McKen, Aberdeenshire
Gordon has worked with Scottish Pig Producers since 1979 and has dedicated himself not only to effective pig marketing but also recognised the importance of industry representation and policy to further the interests of SPP’s membership.

21. Peter Thompson, Hampshire
Peter is the farmland biodiversity manager at the Game & Wildlife Conservation Trust and a leading authority on practical methods and training for implementing conservation programmes on his clients’ farms on a one-to-one and group basis.

22. John Baker, Nottinghamshire
A broader cropping range, a can-do attitude and a clear marketing strategy have been brought by John to the 2,929ha on which he manages a wide range of enterprises. These are predominantly arable but include 180 pedigree Longhorns on HLS land in Sherwood Forest.

23. Scott Kirby, Shropshire
Turning a college farm from loss to profit through sustained growth and development has been achieved by Scott. This involved ambitious innovation across a large range of enterprise which must also serve educational demands.

24. Andy Rankin, Suffolk
Andy manages a large staff producing diverse crops on a wide range of soils across 3550ha. He has overseen substantial expansion alongside collaboration with five other growers in the development of a vegetable packing and marketing group.

25. Philip Baynes, Cambridgeshire
Philip is the versatile head tractor driver on a 1,500-acre farm with an impressively professional attitude to the task of evaluating new machinery purchases,

26. William Raw, Derbyshire
William is a tireless worker who manages the heifer and bull calf enterprises as well as organising the feeds and silage on a busy 550-acre dairy beef and arable farm.

27. Ian Stubbs, Lincolnshire
Ian is the main tractor driver on a large arable farm with responsibility for operating and maintaining some of the biggest and most sophisticated machinery on the market.

Green Energy Farmer of the Year

28. Tim Barton, Wiltshire
Tim has been in the “grow my own energy” business for over 10 years and has reaped the benefits of substituting the increasing energy demands of his 273ha arable and retail farm business.

29. Gareth Williams, Herefordshire
Gareth has demonstrated a clear understanding of how important it is to reduce energy use and match energy generation to demand on the 236ha mixed farm he manages.

30. Steve Edmunds, Somerset
Steve’s approach to the use of renewable energy technology on his 142ha beef and dairy farm shows in a realistic way how food and energy can be produced side by side.

Local Food Farmer of the Year

31. Andrew & Maria Henshaw, North Yorkshire
Customer service, niche products and full traceability are at the heart of this couple’s Mainsgill farmshop, tea room, bakery and butchery, which centres on a 200ha beef, sheep and pig unit.

32. Kevin Stokes, Leicestershire
Turnover and profits have grown more than tenfold at Farndon Fields since a butchery, café and kitchen were added to the original farm shop on this 210ha arable, fruit and vegetable business.

33. Roland Watkins, Carmarthenshire
Cwmcerrig farm shop and grill has the royal seal of approval, with Prince Charles ranking among the many impressed visitors to this 100ha mixed beef, sheep and poultry family-run livestock farm in south Wales.

35. David and Sue Morgan, East Yorkshire
A highly motivated family team that is trialling free farrowing with Sainsbury’s on a large scale with 1,700 breeding sows on 80ha.

36. David and Jill Robinson, Suffolk
A trail-blazing eco-farm, which is an outdoor pig business with 1,800 sows across two units on 200 acres of rented land.

37. Mark Gorton and David Garner, Norfolk
Mark and David rear free-range and organic chicken and turkey, processing their Freedom Food birds through their own state-of-the art factory in Shropham.

38. Ian Johnson, Derbyshire
Ian is a broiler grower from Derbyshire, producing 80,000 birds in three sheds for Vion. He uses the latest equipment to optimise bird welfare and maximise efficiency.

39. Gordon Whiteford, Inverness
Gordon has built his organic egg business up from scratch and now supplies local food service outlets, as well as developing his own Highland Eggs brand.

41. Neil Perkins, Pembrokeshire
Embracing low-cost sheep production and using tools such as EID to help is one of the aims on this 243ha coastal lowland grassland farm.

42. Charley and Andrea Walker, Borders
Low input, productive sheep are the name of the game for the Walkers, who have developed a hardy, maternal, wool-shedding sheep on their 253ha organic upland beef and sheep farm.

43. Craig Grant, Strichen, Aberdeenshire
Attention to detail has helped Craig build a successful free-range egg enterprise on his family’s farm and establish an additional 16,000-hen laying unit in his own right.

44. Ed Lovejoy, Woodchurch, Kent
In just seven years and from scratch, Ed has developed his own farm business running over 400 ewes on rented ground, offering contract services and selling hay and straw.

45. David Merrett, Slimbridge, Gloucestershire
Since joining the family partnership, David has been influential in expanding the farm from 100ha to 400ha and dairy cow numbers from 60 to 210 cows. 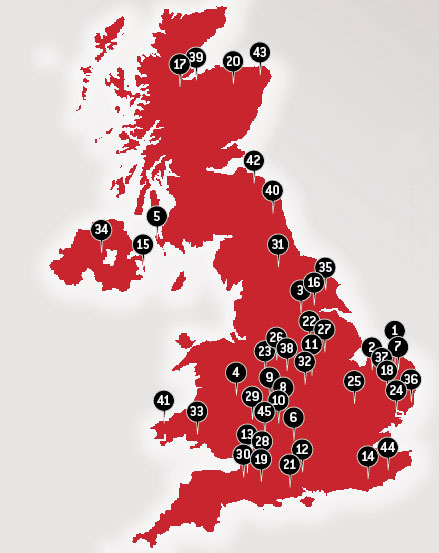 Find out all you need to know about the Farmers Weekly Awards 2012 including information on its judges, sponsors and where the event will be held.