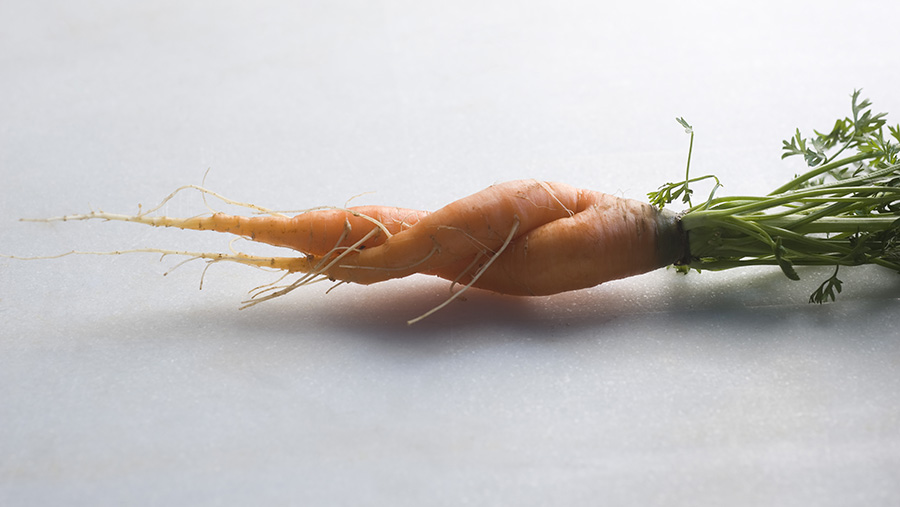 On the face of it, the media push to force supermarkets to sell “wonky veg” sounds perfectly reasonable. I disagree with it, however.

Someone like Jamie Oliver appears on the television with a weeping farmer standing next to a heap of grotty parsnips and suddenly everybody only wants to eat bent cucumbers or straight bananas.

Anyone, like me, who prefers their parsnip to be wide at the top and narrow at the bottom is left looking as if we’re set on creating an evil super race of vegetables.

I am glad that society has largely stopped discriminating against people for their mobility, gender, race or sexual orientation, but I am not convinced that we now need to grant the same rights to vegetables.

As a proud grower of normal produce, I am happy to debunk the terrible myths that are being promoted.

Myth one: Wonky vegetables are tastier or more natural

This insults even the intelligence of townies.

Nature intends vegetables to be vegetable-shaped and misshapes are usually the result of mismanagement such as planting in inappropriate soil conditions.

Produce tastes better when it is fresh and handled carefully. It does not taste better because it was grown by someone who was not very good at their job.

This is rarely true. They are used for stock feed or sent to factories to be made into products such as soup, juice, baby food or that unimaginably awful gloop from which I presume those certain types of crisps are made.

Urban folk prefer to buy processed food to free up more time to play video games and that is fine by me.

This is a superior environmental outcome to the alternative, a well-intentioned do-gooder buying a carrot shaped like a pig’s tail which they rinse under a running tap and then peel to a fifth of its original size; putting the remainder in the dustbin.

They might feel that they are getting closer to nature, but all they are doing is blocking the drains. It is better to leave the waste in a factory where it can be used in an anaerobic digestion plant rather than ship it around the UK.

The value of products sold for processing is usually pitifully low, I admit that, but this is a reflection of supply and demand rather than low inherent value.

When crops are in short supply, these values rise.  Quality is relative and the specification for Grade 1 produce alters when it needs to. In 2012, for example, when there was a poor potato harvest, the size for baking potatoes was reduced from a 65mm diameter to 60mm.

Obviously this is what they say on camera when Hugh Fearnley-Whittingstall waves his recycled clipboard in their face.

Five minutes later they are practically killing someone to get to the last bag of clementines that doesn’t contain a rotten one.

At the time of writing, you can buy British un-wonky potatoes in a supermarket for less than 18p/kg.

This means that a person working for the minimum wage can buy 40kg of potatoes from one hour’s labour.

If a “good” potato is only worth 18p/kg then what is a “bad” one worth?  We should be offering premium alternatives rather than downmarket options.

I am all for educating the public, but shouldn’t the farming industry be defending high standards rather than low ones. Royal Doulton wouldn’t sell a teapot with two spouts.

John Lewis don’t sell pullovers with no hole for your head.  Why would we wish our customers to buy defective produce?

There is nothing wrong with having a trade which benefits the best performers and punishes those who haven’t managed to do such a good job. It is called progress. We shouldn’t fear it.