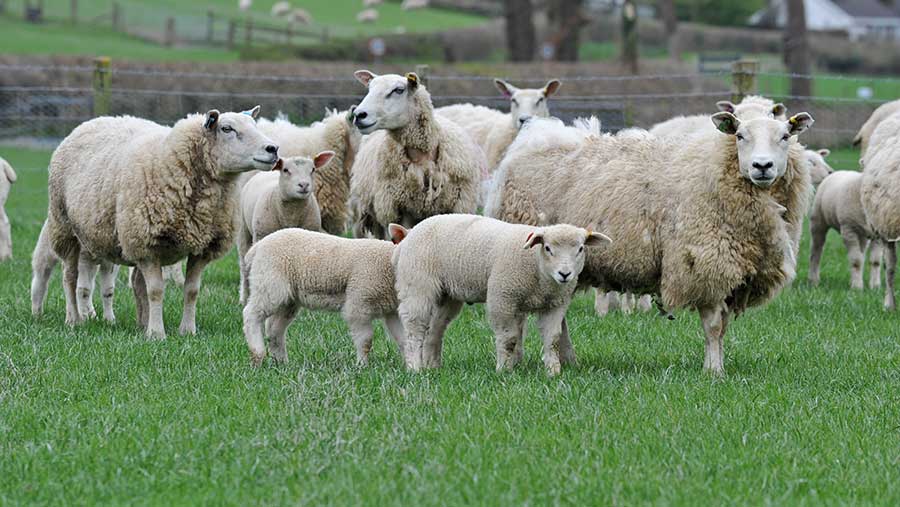 Lambs at Innovis’s Capel Dewi and Bontgoch sites are weaned as early as 10 weeks. © Debbie James

Research and industry advice mostly agrees on 12 weeks as the optimum weaning age but, if ewes are lean, grass height is below 4cm, or lambs are growing less than 150g/day, early weaning is beneficial.

This is because competition for grass will be affecting performance, says sheep and grassland specialist Poppy Frater of SAC Consulting, part of Scotland’s Rural College (SRUC).

“It is not only about getting lambs away, but also focusing on ewe condition in time for mating – this is highly influential to next year’s lamb crop,’’ advises Ms Frater.

Here we examine when to wean and other weaning management issues.

The timing of weaning is dictated by the development of the lamb’s rumen – wean too early and the animal will be unable to digest pasture or other feeds.

Even when the rumen is sufficiently developed, withdrawing nutrient dense-milk could affect lamb growth.

By week four, the lamb’s rumen is fully developed, so its ability to utilise other feeds is no longer a concern, says Ms Frater.

As animals age, their efficiency at converting feed into growth decreases, therefore young lambs must have the best grass or feed to replace declining milk supply.

“By 12 weeks the contribution of milk to the diet is small, but as this is still very nutritious it is really worth considering the degree of competition between the ewe and lamb under the conditions of the season,’’ says Ms Frater.

Stocking rate and grass availability are factors too, as is sheep breed – for instance, hill ewes should be weaned in good time as grass quality quickly deteriorates in the autumn.

As overfat and lean ewes will underperform, assessing body reserves at weaning allows sufficient time for condition to be altered before tupping.

Increasing condition in an upland ewe from a 2.0 to a 3.0 will increase the lambs carried or scanning percentage per ewe, says Kirsten Williams, senior beef and sheep consultant at SAC Consulting.

Managing ewes by condition score is a more sustainable strategy than conventional flushing of thin ewes, she suggests.

“Condition scoring at weaning, or at the very latest eight weeks before tupping, is vital.’’

Typically, it takes eight weeks to change one condition score – the equivalent of 12% of liveweight. Therefore, a 70kg ewe would need to lose or gain 8.4 kg to move one score.

Investigate why a ewe is lean with faecal egg counting for worm burdens, or consider fluke, Johne’s or Maedi Visna as causes.

“The results should be discussed with a vet and appropriate action taken,’’ says Ms Williams.

Dry off ewes after weaning by providing low quality grazing or feed for around two weeks.

Thereafter, ewes that have reared multiples need special attention, as do gimmers and hogs; hill ewes are especially vulnerable if returned to the hill in poor condition.

If a ewe needs to gain 8.4kg to improve condition by one score, the target daily live weight gain should be at least 170g/day.

Supplementary feeding may be justified if ewes are in poor condition, says Dr Catherine Nakielny of Farming Connect.

“The decision to feed ewes should be based on the cost benefit of potential condition score gains, but it is important to first understand if there are underlying reasons why ewes are lean,’’ she says.

4. Taking lambs through to finishing – what feed to provide

In a set stocking situation, target sward height should be 4-6cm; where grass is above or below this, minimise losses in lamb performance by supplementary feeding, weaning or shutting off additional fields for silage.

5. Vaccinations and other interventions at weaning

Be aware of resistance issues to wormers because if a product is not working, lambs will need more feed to achieve finishing weights.

Weaning is a good time to review the farm’s lameness policy in accordance with the Five Point Lameness Reduction Plan.

Implementing the plan at weaning reduces the chances of affected sheep carrying and spreading disease to other ewes and lambs the following spring.

Think ahead to vaccinations pre-tupping – the farm’s vet is best placed to advise on what vaccines are appropriate for an individual farm and the best time to administer.

Weaning as early as 10 weeks allows lambs at Innovis’s farming enterprise in Ceredigion to hit liveweight targets because they can utilise the best quality pasture without competition from ewes.

Ewes and lambs compete for grass when there is pressure on supply, so the enterprise never weans lambs later than 12 weeks.

“There have been numerous studies in New Zealand that show that once lambs get to eight weeks the milk supply curve diminishes while the nutritional needs of the lamb increases,’’ says Dewi Jones of Innovis.

When he weans is influenced by grass supply and the performance of the Aberfield and Highlander ewes and lambs.

“If there is grass in abundance and sheep have lots of feed ahead of them we might not wean at 10 weeks, we might push it back to 12 weeks,’’ Mr Jones explains.

All lambs are retained until 16 weeks, at which point they are ultrasonically scanned for muscle and fat depth; lambs not making the grade for breeding are sent for slaughter.

Mr Jones says lambs from the March lambers will almost certainly be weaned at 10 weeks this spring.

Even though ewes were at target condition score 3 at lambing, they will struggle to hit peak lactation at three weeks because of challenging conditions this spring, he says.

“We haven’t fed any supplementary feed for three years but we had to for the final three weeks before lambing this year.’’

At weaning, lambs remain in the field where they have grazed with their mothers to help ease them into the new feeding regime, while ewes are moved to a field as distant as possible from the lambs.

Mr Jones says early weaning has never resulted in an increase in mastitis rates. “We would never partially wean or use drying off tubes,’’ he says.