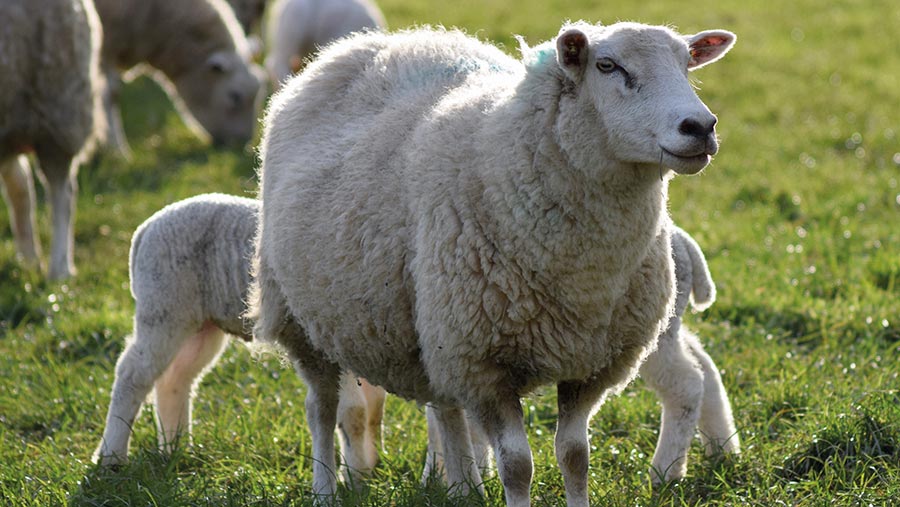 SAC Consulting sheep and grassland specialist Poppy Frater says the process of calculating ewe efficiency can be simplified to make it practical for a commercial flock.

She says ewe efficiency records can be used to assess how well maternal genetics are performing and what you can do to improve feeding and body condition score management.

Eight-week weights can also be a baseline for lamb growth later in the year.

Commercial ewes should rear 50% of their weight by eight weeks and lambs should be able to match the ewe’s weight by sale day. So a 75kg sheep rearing a 44kg lamb needs to rear 170%.

What you need to know

How to benchmark flock efficiency

The collected eight-week weights can be used a month later when weaning or deciding when to wean, explains Ms Frater.

Weaning at 12 weeks is standard, but if ewe condition is suffering and grass supply is low then weaning at eight weeks can be an option.

If lambs are growing at less than an average of 150g a day after eight weeks, it might be best to prioritise the best grass direct to the lamb.

“If lambs are growing less than 100g/day it’s definitely time to wean and investigate the problems,” says Ms Frater.

Biologically, the younger lambs have better feed efficiency, so will make better use of grass or supplementary feed, she adds.

Ewe efficiency can be used to critique flock performance and influence system changes.

Lamb weight, ewe weight and lamb volume can potentially flag up a variety of issues.

Alan West has scrutinised eight-week and ewe weights in his flock since the Lleyn Sheep Society launched the Lleyn Gold scheme in 2015.

Decisions to feed at lambing, paddock graze, wean early and creep feed have been informed by looking at ewe efficiency data along with body condition score and grass availability.

And while 2016 was the best year, extreme weather conditions have made subsequent years harder on the sheep, leading Mr West to believe that, overall, progress is being made (see table).

The scheme aims to select for moderate-sized, prolific, milky, maternal ewes that rear twins. Ewes are ranked on the percentage of bodyweight they rear, with dams achieving 60% ranked as Lleyn Gold.

Mr West marks ewe lambs out of Lleyn Gold sheep with a coloured spot on the back of their head. Marked lambs that are correct and look strong and balanced are retained for breeding.

Individual lamb weights and ewe performance can be calculated because lambs are usually tagged and have parentage recorded within 24 hours of birth as part of Signet recording.

“Lleyn Gold is starting to show through in the flock,” says Mr West. “One thing that does stand out is that mature ewes that achieve Lleyn Gold usually do so repeatedly.”

Last year, 20% of the ewe tegs joining the flock from Lleyn Gold dams achieved Lleyn Gold, while this year, as two-shears, it was 60%.

Mr West explains that simplicity is key to running his small flock on a commercial basis, with feed used only to supplement grass growth.

Clover, yarrow and plantain have been stitched in permanent pasture to improve persistence, palatability, mineral availability and drought hardiness.