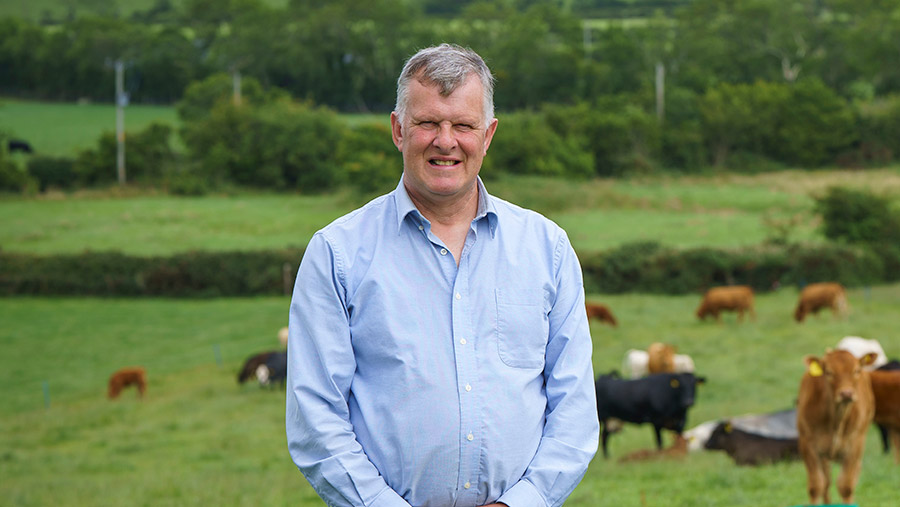 Sky-high farm input prices and rising rents have prompted Sam Chesney to re-evaluate his business and take a slight change in tack, in an attempt to improve suckler-cow margins.

This spring, he is introducing Stabiliser genetics into his continental beef herd to reduce feed costs and improve fat cover of finished progeny.

He is also planting a further 8ha (20 acres) of herbal leys following a successful European Innovation Partnership (EIP) project, during which he grew 2.5ha (6 acres) of the mixed swards for 40 heifers he is finishing on contract for Blade Farming.

Not only did the heifers average 0.97kg liveweight gain a head a day throughout the grazing period (February until October), fertiliser use on the herbal leys was half that used on perennial ryegrass, at 90kg N/ha, but grew the same amount of forage.

“I’m very concerned about the profitability of suckler beef in the whole of the UK,” admits Mr Chesney.

One way he is addressing this in his own herd is by using lower-input breeds.

Heifers will be synchronised in June and served with Givendale Va Va Voom semen. He is in the top 1% of the Stabiliser breed, and ranks five-stars for weaning and four-stars for finishing. Crebilly Black Walrus will be used as a sweeper after three weeks. He is in the top 5% based on his finisher index, eye muscle area and weaning weight.

Another stock bull from the Crebilly herd has been hired for three weeks to mate first calvers and young cows. After this, they will be put to Crebilly Wanaka for another seven weeks. Wanaka is in the top 5% for profit index and finisher index.

Meanwhile, older cows will be served to the farm’s existing Charolais and Black Limousin bulls.

About half of the Charolais and Limousin progeny don’t have enough fat cover and fail to achieve bonuses, despite killing out at mostly E and U grades, explains Mr Chesney.

“We want something easy-fleshing and easy-calving. We are finishing bulls at 12-14 months, but not heifers,” he adds.

The Stabiliser Cattle Company was the first to measure net feed efficiency, and Mr Chesney is hoping to capitalise on this by introducing the breed’s genetics to his 130-cow Limousin-cross herd.

“The Limousin and Charolais are good cattle, but they eat too much. I’d like to reduce my feed bill by about £20-£30 a head and it’s not going to happen with Charolais or Limousin. I think continental breeds have lost their way – they are too hard to flesh.” 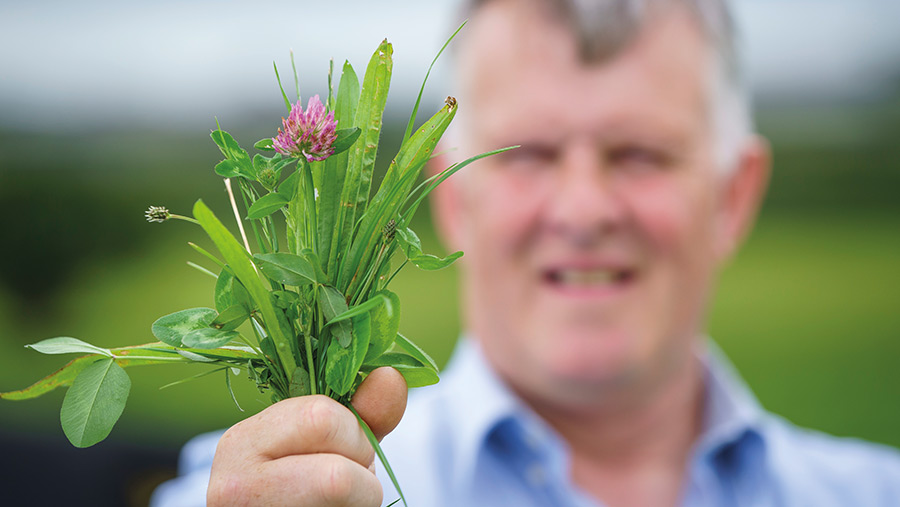 “In the drought last year, the herbal ley was the only thing that was growing because of its deep roots,” says Mr Chesney, who was also impressed by the mixed sward’s anthelmintic properties.

“We didn’t dose any of the heifers that grazed the herbal ley last year until they were housed, and that was just for lungworm.”

He also believes it stops cattle selectively grazing, recounting the fact that when the heifers had a two-week break from the herbal ley last summer, they “ate anything”, including docks, because they were used to the different species.

The herbal ley, which includes perennial ryegrass, red and white clover, plantain and chicory, will be oversown with rape to act as a nurse crop.

“Before, we grew a cover crop of spring wheat and cut it as wholecrop and put it in the silo, but the herbal mix was very wet. It was like driving up a wave on the silo. The rationale behind the rape is to protect the seeds and give them the chance to grow under a canopy.”

Timothy is also being added to the herbal mix this year to protect against cold and wet weather.

It will then be grazed in July or August with weanling and bulling heifers.

The aim is to reduce stocking rates from 3.2/ha to 2.8/ha to help improve the farm’s sustainability.

“My output is phenomenally good, but we may just slow down a bit – because if there is a new climate bill in Northern Ireland, draconian measures will force farmers to reduce stocking rates.

“I’m very concerned about the image the beef industry has when it comes to carbon footprint. Farming is the only part of the solution.”

To try and prove beef’s green credentials, Mr Chesney would like to put together a “green policy” for farming in Northern Ireland, and wants to see better promotion of beef.

“I think we should be talking about the flavour of beef more, which is why I’m trying to buy bulls for muscular fat.”

The 2021 Farmers Weekly Grassland Manager of the Year Award is sponsored by Germinal.