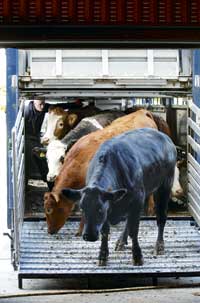 Meat hygiene inspection fees look set to be passed on to abattoirs and farmers at a cost of millions of pounds.

In a landmark statement The Food Standards Agency’s said subsidising the meat industry was no longer part of its remit and it intended to pass on the costs.

The decision, announced at an FSA Board meeting in London, drew howls of protest from across the meat industry and prompted an announcement that stakeholders would meet urgently to oppose the verdict as a united industry and appealing directly to politicians.

The Scottish Association of Meat Wholesalers (SAMW) described the decision as a “cop out”.

The FSA currently pays about £36m towards meat hygiene regulation in Great Britain and in Northern Ireland the controls cost £7m.

About half this cost is recovered from industry while the other half is paid as a subsidy. The FSA claimed that the best protection for consumers from food risk should not be based on economic circumstances or the ability of the industry to pay and added that there was a need for consultation with the industry and the UK Government over the cost of official inspections at abattoirs and cutting plants.

However, FSA Scottish director Professor Charles Milne emphasised the move was not a fait accompli. “It is now up to the FSA Executive to talk to stakeholders and work out how to implement the board’s decision,” he said. “The subsidy is costing a significant proportion of the FSA’s total £158m budget. It also seems wrong that a regulator is subsidizing an industry which it regulates.”

But NFU Scotland said it was “incensed” that the FSA was going down this route when attempts to strip out many unnecessary costs around meat hygiene inspections were far from resolved. Union vice president Nigel Miller added: “It is a decision that will drive additional cost into a Scottish meat processing sector that is already bogged down in bureaucracy and dwindling margins. That ultimately will have ramifications for our farmers who supply the Scottish meat trade with their livestock.”

SAMW executive manager Ian Anderson said the FSA was leaving the industry at the mercy of a UK Government which would use the “blunt instrument” of full cost recovery by the back door.

“Many other foodstuffs which command a similar health status and requirement to meat are subjected to far less scrutiny than is the case for our industry,” he said . “If the FSA wants to pursue the route which it has chosen, it must live up to its own rhetoric of providing risk-based, proportionate controls, and bring such measures in now in place of today’s antiquated regulation and excessive supervision. Failure to do this will ultimately result in the demise of Scotland’s world-class meat industry.”