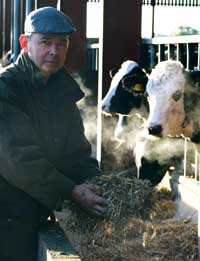 Is there any money to be made from finishing black-and-white bulls and steers with rising feed costs and declining beef prices?

The recent fall in beef prices coupled with rapid escalations in grain prices have left some finishers wondering if there is any margin to be made from black-and-white bulls and steers.

But, with a simple, effective system in place and access to good value feeds, Linton on Ouse, Yorkshire producer Will Kirby, believes there is still money to be made out of finishing more than 500 black-and-white steers a year.

As a 200-acre mainly arable unit with just 20 acres of permanent grassland, Mr Kirby believes finishing dairy bred steers is the best way to add value to the grain he grows. He says it’s the simple practice of walking the grain off the farm rather than selling off the field.

Until single farm payments were introduced, the farm had been running a 100-cow suckler herd, but the changes to the support system made them uneconomic so the number of finishing cattle was increased. The permanent pasture is now used as summer grazing for the 40 or so heifers he finishes both for his own freezer trade and for local butchers.

But, Mr Kirby realises the value in making sure the cattle he now finishes are always putting on flesh and aims to maximise growth from the first day they arrive on the farm. “You simply can’t put a price on having cattle performing from day one.

“There’s nothing worse than cattle that take a couple of weeks to adjust to a new diet and historically that has been a problem as we used to run a simple barley beef system feeding ad-lib from hoppers.”

Nowadays Mr Kirby has switched to a mixed ration for all the finishing cattle on the farm and has seen a massive improvement in how quickly cattle take to the feeding regime. “Cattle are up to full intake within a matter of two days and you can see them thriving on the diet. We see much fewer, if any, cases of acidosis which could always be a problem on the old system.”

But while he takes every care to ensure cattle thrive once they arrive Mr Kirby is quick to point out that making sure the right cattle are sourced in the first place is equally important to success. “All the cattle are sourced for me by an agent who knows exactly what I’m looking for and will only buy a batch when he thinks they’re right.

“Even when I want more cattle when there aren’t any of my type in the market that day he won’t buy. And I have the option to see the cattle he’s got for me on his farm before I agree to take them. Only once I’m happy with them do I pay for them and take delivery.”

“On more than one occasion I’ve said no to a batch of cattle because I felt they wouldn’t suit me. You have to take care to avoid any cattle that haven’t had a good start in life,” explains Mr Kirby, who likes to buy 16 to 18-month-old steers and then take them to about 300-320kg deadweight, generally achieving this within three to six months.

Once cattle arrive at Linton Woods Farm, they are left in their arrival group until they have settled into their surroundings and the new diet. Then, once he is happy they are thriving they are allocated to one of the batches of cattle already on the unit according to their growth stage and closeness to slaughter.

With cattle sourced largely from the south-west of England, Mr Kirby has had a number of TB tracer tests flag up in finishing cattle, however, with the need to source good numbers of evenly matched black-and-whites this is a risk he accepts he has to take. “I’d rather avoid it if I could, but we need the cattle and we’ve never had a problem with a tracer test yet.”

Ration formulation is crucial to maximising the throughput of cattle on the unit and for this Mr Kirby relies on Keenan nutritionist Seth Wareing and the PACE box fitted to his mixer wagon. “We hadn’t used a nutritionist until we switched to a mixed ration system.

“But now we’re really seeing the benefit, particularly as the mixer wagon has allowed us to use a lot more varied feeds, such as soya hulls, sweet starch and biscuit meal. Hopefully, in future we’ll be able to use biofuel co-products too as another feed source.”

Mr Kirby’s finishing cattle are now achieving a daily liveweight gain of 1.51kg/day on a ration costing £1.64/head a day, with an average sale price of £1.30 that’s leaving a margin of 32p a day, explains Mr Wareing.

“In the last 18 months Mr Kirby has seen feed conversion efficiency increase significantly, with a corresponding drop in the feed cost for every kilo of gain. In January 2009 cattle at Linton Woods Farm had a daily liveweight gain of 1.2kg a day and by August last year that had improved to 1.35kg a day, while dry matter intake had increased by only 0.1kg a day. In the same period the cost/day dropped by 19p a head, while the cost/kg fell by 24p.”

At the moment the ration comprises home grown fodder beet, home grown wheat, biscuit meal, soya hulls, dark distillers’ grains, straw, a mineral mix and lime. However, Mr Kirby takes advantage of lower priced feeds when they become available and is often able to take delivery of feeds at short notice, helping keep costs down. No forage crops are used in the ration.

And, whereas previously when feeding ad-lib cereals Mr Kirby was feeding ad-lib straw in ring feeders, the inclusion of straw at about 1kg a head a day is now sufficient to keep the rumen balanced and keep cattle in good health. “This is far less then when cattle were on ad-lib straw and it is much easier to get into them. Before it would have been a long time before they would adapt to eating straw.

And Mr Kirby has seen a real demand for the black-and-white steers he sell through the ring at York and Thirsk. “There’s a ready demand for them, particularly as we’re usually selling a batch of 10-15 evenly finished cattle a week, with most of them killing out at fat classifications 3 and 4L. Even when I draw a lean beast at fat class 2 they still sell well because of the demand for lean mincing meat from the retailers.”

Cattle from the farm have also been sold deadweight in the past, although the failure of North Country Primestock in recent months has made Mr Kirby more cautious of dealing with deadweight buyers. “However, we have seen the cattle making more on a deadweight basis than in the live ring and we’re now sending them to St Merryn, dealing with them direct.”