HAVING BEEN missing from the East of England show for some years, Jerseys made a welcome return, as they took top spot in the dairy lines at last weekend’s show. 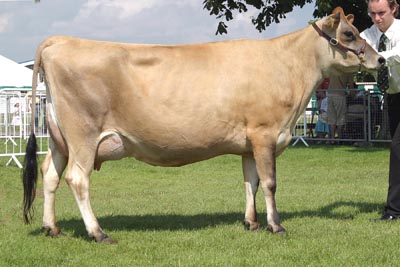 Back in style….Having missed the East of England Show for several years Jerseys made a welcome return, clinching the interbreed dairy title with this cow Barnowl PLS Milly Bouquet.

Currently giving 28kg, Bouquet is sired by Potterswall Lord Juno and is the first Canadian cross to come out of a pure Island bred cow from Mr Reader’s Barnowl Jersey stud. “She calved last month, but already she has a fat score of 5.3% and protein at 3.9%,” said Mr Reader.

Selecting her on the day was Norfolk-based Nick Dain, who described her as a beautiful, modern milking Jersey with good locomotion and style.

Mr Dain’s reserve choice was the British Friesian from Edgar Burroughs. This powerful third lactation cow is sired by Grove Breadwinner and out of a homebred cow.

In the beef lines, it was turn of a Limousin to dominate the show rings. Stepping up to the challenge of selecting a champion was Richard Bartle of Shifnal, Shrops who found his champion in Doug Mash’s five year-old Limousin cow Reseda, shown by Paul Walker. 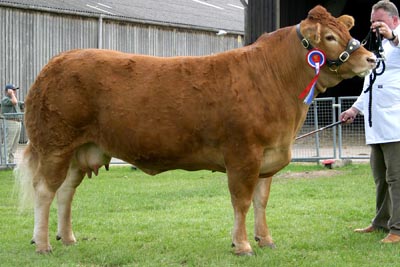 Further success came for Mrs Padfield in the strong commercial section as her and partner Paul Barwood took the champion ticket with Cougar, a three quarter Limousin steer weighing 525kg.

Cougar was purchased in Carlisle last September and is half brother to Posh Pants who won countless championships for the partnership last year.

In the sheep rings Andrew Pinny’s Texel ram lamb caught the eye of interbreed judge John Brigg. This was a first time win for the February born lamb sired by Muiresk Jack the Lad and out of a homebred ewe. 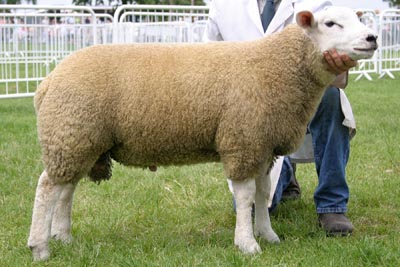 Texel Triumph……Leading the way in the sheep lines was Andrew Pinny’s Texel ram lamb by Muiresk Jack the Lad.

Taking reserve spot was Derek and Jean Ritchie’s Hampshire Down ewe lamb. Again first time out on the show circuit, she is buy a home bred ram lamb from the couples 25-ewe flock.

In the strongly contested pig classes Guy Kiddy came out on top with his Large White gilt Withersfield Queen Mary 3. Prepared by the students of Shuttleworth College, this gilt was fresh from a reserve supreme title at Suffolk Show. Judge Alan Rose of Somerset selected the Welsh boar Lopham Victor 21 from Peter Reader as a close reserve.