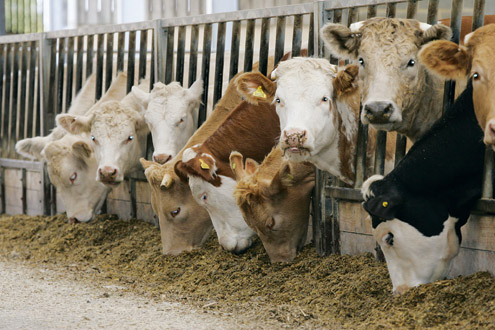 Beef cattle being finished on diets based on silage that hasn’t been analysed could be underperforming by up to 50% this winter, reports Jeremy Hunt

Failure to analyse forage and balance rations accordingly could mean some nasty surprises when yarded cattle are drawn for sale and found to be well short of their finished target weight.

It’s a situation that beef producers must address as a matter or urgency after a summer that has had a huge impact on silage quality.

Poor forage quality may not only result in lower daily liveweight gain, but may also lead to money being wasted on supplementary feeds that aren’t meeting the dietary shortfalls of the forage.

And the sting in the tail of this year’s “mixed bag” of forage quality is already starting to bite, according to Steve Powdrill of EBLEX.

“Slaughter cattle that have been coming through the system in early autumn are already showing signs of the poor quality of the grass and the forage they’ve been eating in recent months. They may look finished, but a lot have clearly needed more supplementary feed or been receiving extra feed that hasn’t made up for the shortfall of the forage.

“Producers are at risk of losing out on killing-out percentage and on classification so making sure cattle finishing diets are good enough to do the job is a real priority for finishers this winter,” says Mr Powdrill.

While the hike in feed costs is making finishers “shop around” in an effort to buy at the best possible price, nutritionists say it’s impossible to assess the true cost of any bought-in feed unless the silage being used has been analysed.

Home-grown cereals on farms where crops have suffered from the bad weather and have low bushel-weights may have been retained for feeding based on the lower sale value of the crop. But cereals with low bushel-weights cannot be expected to provide the same feed value as a high-quality cereal crop.

Keenan beef nutritionist Seth Waring comments: “Using low-quality cereals in the assumption that they will be an adequate supplementary feed when the silage hasn’t been analysed – or has been and is of poor quality – means cattle will underperform.

“Finishing cattle that are fed diets of low-quality forage and cereals will surprisingly not look as though they are taking too much harm. But while the diet may be OK to “tick-over” suckler cows it will seriously adversely affect the weight gain of slaughter cattle.”

Mr Waring says where cattle should be doing more than 1kg a head a day, a diet that isn’t providing enough protein and energy could see some animals gaining just 0.25kg-0.5kg a day – and that’s going to be very costly.

Once silage has been analysed it’s possible to make more informed decisions about creating a ration that’s the most economical and efficient. There are very few cheap feeds about this autumn, but with their silage analyses to hand, beef producers will at least know precisely what they have to buy-in to make up for their forage’s shortfall.

Options to make up for shortfall

Bread and biscuit meals – as well as sugar beet pulp fed wet or dry – will provide some energy in the ration. But with some feed like rape meal costing about £260/t in early October it’s essential to know exactly what you need to feed to compensate for poor quality silage.

“There’s no room for guesswork this winter if you’re feeding beef cattle. Protein is an important part of the diet, but you’ve got to get plenty of energy in there too,” says Mr Waring.

Pot-ale syrup is a useful supplement, but is only available in some regions. At about £70/t it’s looking good value – although tank storage is necessary.

“This is a good protein and high energy source, but any beef finishers with wet silage must be careful. Adding a wet supplement to a wet silage can produce a forage mix that’s too wet and intakes will suffer,” explains Mr Waring.